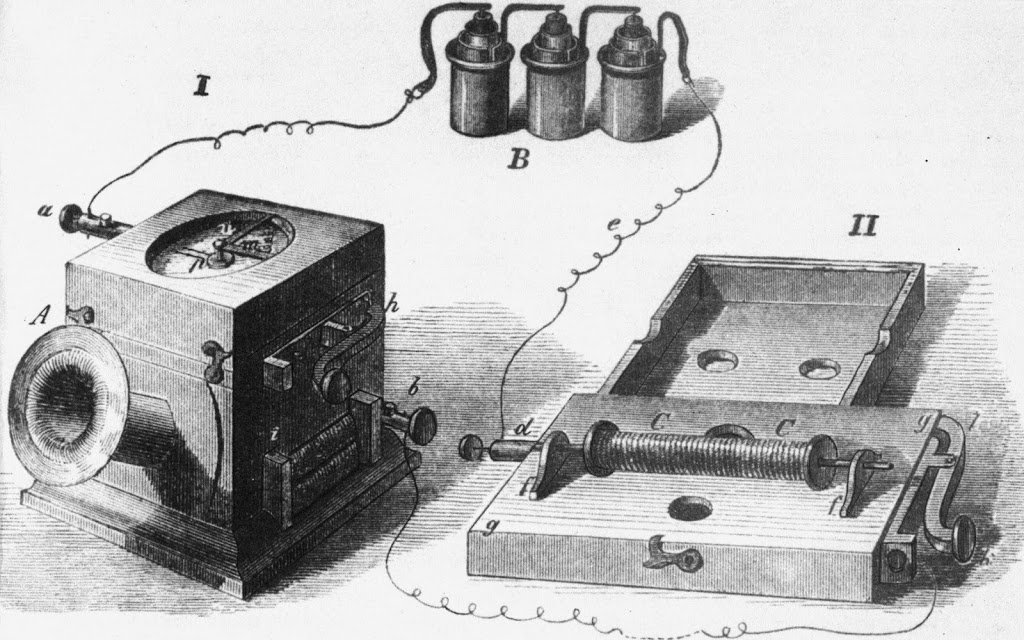 On October 26, 1861, German teacher and inventor Johann Philipp Reis, presented his telephone system at the ‘Physikalischen Verein zu Frankfurt am Main‘. Although it did not convince his contemporaries, his invention marks a milestone in telecommunications.

Philipp Reis was born on January 7, 1834 in Gelnhausen, Germany in a Jewish family as son of a baker. Reis’s mother died while he was an infant, and he was raised by his paternal grandmother, a well-read woman. At the age of six Reis was sent to the common school of his home town of Gelnhausen. Here his talents attracted the notice of his instructors, who advised his father to extend his education at a higher college. In 1845 Reis was sent to the well known Garniersche private school in Friedrichsdorf. There he learned not only mathematics, physics and chemistry, but also English and French. In 1850 the 16-year-old Philipp Reis became an elementary school teacher in Friedrichsdorf. Although he was no entirely trained teacher, he knew how to tie up his pupils with interesting experiments. He was a self educated person and he continued his own education taking private lessons in physics.

In 1852, Reis began work on his “artificial ear” (künstliches Ohr) project by gathering some common materials found around his house in Friedrichsdorf, Germany, not far from Frankfurt. In his first attempts in his homemade lab in a shed in his backyard he was to construct a crude assembly designed to imitate human ear functions only with a very low budget. A violin case was the resonator, a hollowed-out beer can was the mouthpiece, a sausage (Wurst) casing was stretched across it to serve as a diaphragm!

Johann Philipp Reis with his telephone‘s seventh version being demonstrated before the Free German Institute in Frankfurt, May 11, 1862

Early Versions of the Telephone

The telephone was invented by at least five different people in four different countries. Although Alexander Graham Bell is generally credited as the “winner” in the race to invent the telephone in the period between 1850 and 1876, his invention was preceded or paralleled by Philipp Reis, the Belgian-French Charles Bourseul, the Italian Antonio Meucci, and his fellow-American Elisha Gray. Actually, the key to the telephone device is the microphone. For his first experiments in the 1850s, Reis used a sausage skin stretched across a hollowed-out cork as a membrane for his crude microphone (der Geber). Using wax, he attached a metal contact to the membrane. This contact was linked to the strings of a violin, which served as a receiver or speaker. Later he would use an electromagnetic receiver.

Reis and his “Telephon”

After nine years of work, Reis had refined his device to the point that he could present it to Frankfurt’s Physics Association on 26 October 1861. His lecture on “Telephony Using Galvanic Current” („Das Telefonieren durch galvanischen Strom”) did not receive as much enthusiasm as Reis might have hoped for. But two years later, 50 copies of his “Telephon” (he was one of the first to coin the term) were manufactured by a German firm, and a few more in England. Overall, Reis’ telephone was not practical enough to become a commercial success. It could transmit sound, particularly music, but it was difficult to understand the spoken word. Reis died of tuberculosis two years before Bell’s U.S. patent was filed in 1876. Ironically, in his patent fight with Bell, Elisha Gray used the legal defense that it was Reis and not Bell who had invented the telephone, and thus Bell was not entitled to his patent. But the court ruled that the Reis version could not be considered a real telephone, and Bell finally won the patent struggle.

I think this is quiet some sentence 😉