You are here: Home › chemistry › Jaroslav Heyrovský and the Polarography 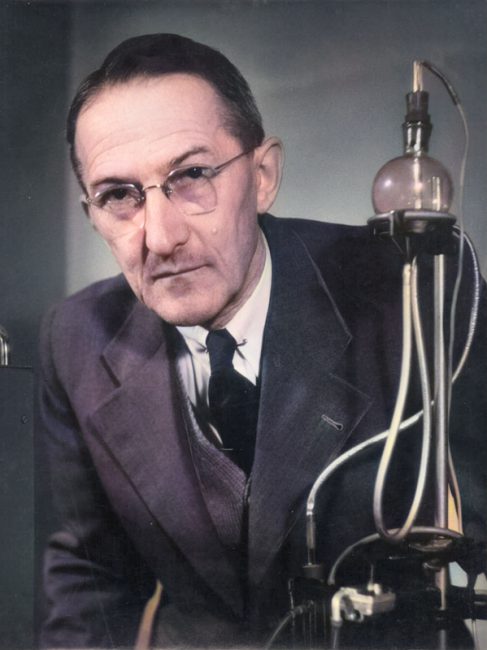 On December 20, 1890, Czech chemist and inventor Jaroslav Heyrovský was born. Jaroslav Heyrovský received the 1959 Nobel Prize in Chemistry “for his discovery and development of the polarographic methods of analysis” (1922), which is one of the most versatile analytical techniques. It applies the principle that in electrolysis the ions are discharged at an electrode and, if the electrode is small, the current may be limited by the rate of movement of ions to the electrode surface.

Jaroslav Heyrovský attended Charles University in Prague where he studied chemistry, physics, and mathematics. In 1910, he continued his education at University College London. In the following years of the First World War he was drafted as a soldier of the Austro-Hungarian army. In the medical service he was employed as a chemist in radiology. There he was able to continue his studies and to take his Ph.D. degree in Prague in 1918 and D.Sc. in London in 1921. Also in 1920 he habilitated at the University of Prague. He then worked there as a lecturer in physical chemistry. At the Institute of Analytical Chemistry of the Charles University, Prague, Heyrovský started his university career. After first being assistant to Professor B. Brauner, he was promoted to Associate Professor in 1922 and in 1926 he became the University’s first Professor of Physical Chemistry.

The Invention of Polarography

Around 1922, Heyrovský invented the polarographic method. Polarography is a voltammetric measurement. Its response is determined by combined diffusion/convection mass transport. Polarography is a specific type of measurement that falls into the general category of linear-sweep voltammetry where the electrode potential is altered in a linear fashion from the initial potential to the final potential. Professor Kucera was present at the defense of Heyrovský’s doctoral thesis in 1918 and aroused his interest in a dripping mercury electrode. These were used to study electrocapillary forces. To do this, the experimenter either weighed the droplets of mercury or determined the drip time. The values were plotted against the applied electrochemical potential in a diagram.

As a linear sweep method controlled by convection/diffusion mass transport, the current vs. potential response of a polarographic experiment has the typical sigmoidal shape. What makes polarography different from other linear sweep voltammetry measurements is that polarography makes use of the dropping mercury electrode (DME) or the static mercury drop electrode. A plot of the current vs. potential in a polarography experiment shows the current oscillations corresponding to the drops of Hg falling from the capillary. If one connected the maximum current of each drop, a sigmoidal shape would result. The limiting current (the plateau on the sigmoid), called the diffusion current because diffusion is the principal contribution to the flux of electroactive material at this point of the Hg drop life.

Heyrovský and his colleague Shikato developed the electromechanical polarograph from 1924. This device was able to automatically record polarograms and thus made polarographic experiments much easier. For the next 40 years or so, this type of electromechanical instrument dominated. Electronic potentiostats coupled to the mercury drop electrode were then used. Today, a modern polarograph is completely computer-controlled. From 1926 Heyrovský published first publications on the new method. Subsequently, he devoted himself to theoretical studies on diffusion-limited currents and mechanisms of electrode reactions. He also developed the mercury beam electrode and alternating current polarography. In the latter, an alternating voltage is superimposed on the uniformly variable voltage, whereby the alternating current component is measured as an analytical signal.

Throughout his further career, Heyrovský developed this new branch of electrochemistry. He even formed a school of Czech polarographers at the University, and kept researching polarography. In 1950 Heyrovský was appointed Director of the newly established Polarographic Institute which has since been incorporated into the Czechoslovak Academy of Sciences since 1952. In 1959, Jaroslav Heyrovský received the Nobel Prize for Chemistry “for his discovery and development of the polarographic methods of analysis“.

Jaroslav Heyrovský died on March 27, 1967. He was interred in the Vyšehrad cemetery in Prague.

Tina Voelker,  Introduction to why cyclic voltammograms look the way they do, [7]