You are here: Home › astronomy › Jacobus Cornelius Kapteyn and the Rotation of the Milky Way 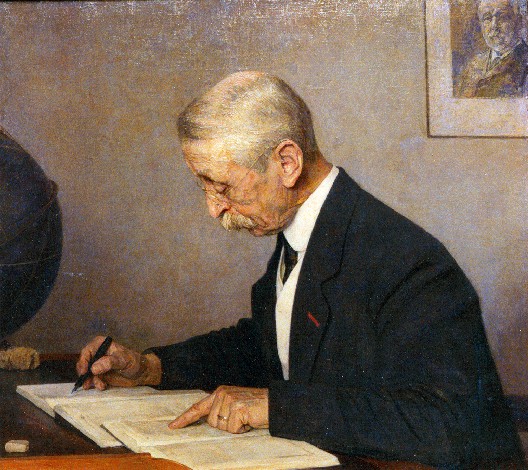 On June 18, 1922, Dutch astronomer Jacobus Cornelius Kapteyn passed away. Kapteyn carried out extensive studies of the Milky Way and was the discoverer of evidence for galactic rotation. He used photography and statistical methods in determining the motions and spatial distribution of stars, the first major step after the works of William and John Herschel.[6,7]

Jacobus Cornelius Kapteyn was born on 19 January 1851 in Barneveld,in the Dutch province of Gelderland, as ninth of fifteen children to Gerrit J. and Elisabeth C. Kapteyn, who conducted a boarding school for boys in Barneveld.[2] At age 17, Kapteyn went to the University of Utrecht to study mathematics and physics in 1868. In 1875, after having finished his thesis on the vibration of a membrane, he worked for three years at the Leiden Observatory, before becoming the first Professor of Astronomy and Theoretical Mechanics at the University of Groningen, where he remained until his retirement in 1921 at age 70. In 1888 Kapteyn became a member of the Royal Netherlands Academy of Arts and Sciences.

The Space Distribution and Movements of Stars

Between 1896 and 1900, lacking an observatory, he volunteered to measure photographic plates taken by David Gill, who was conducting a photographic survey of southern hemisphere stars at the Royal Observatory at the Cape of Good Hope. The results of this collaboration was the publication of Cape Photographic Durchmusterung, a catalog listing positions and magnitudes for 454,875 stars in the Southern Hemisphere. The extremely laborious work was finished after thirteen years of excellent collaboration. For the measurement of the plates, done from 1886 to 1896, Kapteyn devised an unconventional method. Instead of measuring x and y coordinates, he used a theodolite, observing the plate from a distance equal to the focal length of the telescope that had produced the plates. He thus obtained equatorial coordinates directly.[2]

In 1897, as part of the above work, he discovered Kapteyn’s Star. It had the highest proper motion of any star known until the discovery of Barnard’s Star in 1916. In 1904, studying the proper motions of stars, Kapteyn reported that these were not random, as it was believed in that time; stars could be divided into two streams, moving in nearly opposite directions. It was later realized that Kapteyn’s data had been the first evidence of the rotation of our Galaxy, which ultimately led to the finding of galactic rotation by Bertil Lindblad and Jan Oort.[4]

The Star Distribution of our Galaxy

In 1906, Kapteyn launched a plan for a major study of the distribution of stars in the Galaxy, using counts of stars in different directions. This enormous project was the first coordinated statistical analysis in astronomy and involved the cooperation of over forty different observatories. Kapteyn’s life’s work, First attempt at a theory of the arrangement and motion of the sidereal system, was published in 1922 in the Astrophysical Journal only weeks before his death, and described a lens-shaped island universe of which the density decreased away from the center, now known as the Kapteyn Universe. In his model the Galaxy was thought to be 40,000 light years in size, the sun being relatively close (2,000 light years) to its center. The model was valid at high galactic latitudes but failed in the galactic plane because of the lack of knowledge of interstellar absorption. It was only after Kapteyn’s death, in Amsterdam, that Robert Trumpler determined that the amount of interstellar reddening was actually much greater than had been assumed. This discovery increased the estimate of the galaxy’s size to 100,000 light years, with the sun replaced to a distance of 30,000 light years from the galactic center.

Apart from these main achievements, Kapteyn made essential contributions in many other fields. Among these are his attempts, in his early years at the Leiden observatory, to improve upon the measurement of trigonometric parallaxes with the meridian telescope and his later efforts to apply photographic methods for this purpose as well as for the measurement of stellar magnitudes. In his early year he also devised a method to find the altitude of the equatorial pole which would be free of errors in the declinations of the stars and would be independent of errors in the atmospheric refraction.[2]

Kapteyn was a member of the French Academy of Science, a Fellow of the Royal Society and a founder member of the International Astronomical Union. He died in Amsterdam on 18th June 1922 at age 71.