You are here: Home › literature › J.K. Rowling and the Harry Potter Phenomenon 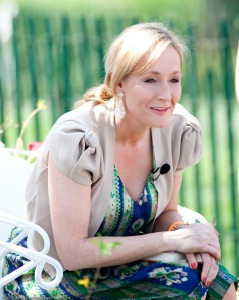 It is the best selling book series ever in history. A fantastic story stretching over seven books of a boy, growing up in between the two worlds of ordinary people – the muggles – and the wizards and witches. It’s about the old story of fighting of good against evil. And as the books sold over 400 million copies world wide, almost nobody could escape the news and the story behind the books, too. The story of J. K. Rowling, a single mother living on social security and becoming a multi-millionaire simply because of a children’s book within a time frame of only 5 years. Actually as of March 2011 Forbes estimated Rowling at US$1 billion.

Joanne Rowling was born in the small south-west English town of Yate near Bristol as the daughter of Anne and Peter Rowling.[4] Her parents came from London and married in March 1965. Peter Rowling worked at Rolls-Royce, Anne Rowling as a laboratory assistant. After Joanne’s birth, the Rowling family moved to Winterbourne, where Joanne Rowling started school in 1970. Already in her childhood Joanne Rowling liked to read a lot, which encouraged her mother a lot. Rowling wanted to become a writer at an early age. At the age of five or six, she invented her first story – about a rabbit suffering from measles. She told these and other stories to her sister Dianne, who was two years younger. In 1974 the Rowling family finally moved to Tutshill near Chepstow in Wales. That’s where Rowling went to Wyedean Comprehensive School. She achieved very good grades, especially in linguistic subjects, but in sports and mathematics she was not particularly good, according to her own statements. In the upper school she was elected as the school representative. The later novel character Hermione Granger corresponds to the image she had of herself at the time, both externally and in character. She described herself as an intelligent wallflower with a gift for teaching. After graduating from school in 1983, she studied French and Classical Studies at the University of Exeter. After completing her studies in 1987, which included a one-year stay as an English teacher in Paris, she worked in various offices, including two years at Amnesty International in London. In 1989 she moved to Manchester with her then boyfriend. During this time she worked on two novels for adults, which she never published and later destroyed.

Riding on a Train

During a train journey from Manchester to London in 1990 she invented the novel character Harry Potter. She knew from the outset that it would be a seven-volume series of books about a young magician attending a boarding school for witches and magicians. In 1991 Rowling went to Portugal where she worked as a teacher at the Encounter English School in Porto in the afternoon. During this time she worked a lot on the first of her Harry Potter books. In March 1992 she met the Portuguese television journalist Jorge Arantes, whom she married on 16 October 1992. After her first daughter was born in 1993, Rowling and Arantes separated in November of the same year. Rowling returned to Great Britain and settled in the Scottish capital Edinburgh. A single mother of a toddler, she lived on welfare while continuing to work on her first book.

Harry Potter And the Philosopher’s Stone

Back in 1995, Rowling finished her manuscript for the first book of the Harry Potter series, ‘Harry Potter and the Philosopher’s Stone‘, which she typed on an old manual typewriter. The book was submitted to twelve publishing houses, all of which rejected the manuscript. A year later she was finally given the green light (and a £1500 advance) by editor Barry Cunningham from Bloomsbury, a small publishing house in London. Then in June 1997, Bloomsbury published the Philosopher’s Stone with an initial print run of only 1,000 copies, 500 of which were distributed to libraries. You won’t believe it, but today such copies are valued between £16,000 and £25,000. Soon after, the book began to win several prizes in the UK and there the story goes…

With the announcement of the forth book, Harry Potter and the Goblet of Fire, being released simultaneously in the UK and the U.S. on 8 July 2000, sales records in both countries were broken. ;ore than 300,000 copies of the book were sold in its first day in the UK, almost equalling the number of the previous book ‘Prisoner of Azkaban‘ sold during its first year. In the US, the book sold three million copies in its first 48 hours, smashing all literary sales records. When book No. six arrived, Harry Potter and the Half-Blood Prince, on 16 July 2005, it too broke all sales records, selling nine million copies in its first 24 hours of release. Finally, with book No. seven Harry Potter and the Deathly Hallows the series ended on 21 July 2007 and again broke its predecessor’s record as the fastest-selling book of all time. It sold 11 million copies in the first day of release in the United Kingdom and United States.

What will come after Harry Potter….

On 23 February 2012, Rowling’s agency announced on its website that Rowling was set to publish a new book but this time targeted at an adult audience. “Although I’ve enjoyed writing it just as much, my next novel will be very different from the Harry Potter series.” said Rowling in a subsequent press release about A Casual Vacancy. A little later, in April 2013, Rowling published the crime novel The Cormoran Strike under the pseudonym Robert Galbraith. Around 1,500 copies were sold by July of the same year. On July 14, 2013, the Sunday Times published an article exposing Rowling as the author of the book. Previously, the newspaper had received a notice to this effect and confirmed it with a stylometric survey. A continuation of the series following the protagonist “Cormoran Strike” appeared with The Silkworm in the following year. A third part appeared in the original on October 20, 2015 under the title Career of Evil. On September 18, 2018, the fourth part of the series was then published with title Lethal White, followed in September 2020, by the fifth volume Troubled Blood.

At the latest from 2013, Joanne Rowling wrote the screenplay for the film Fantastic Beasts and Where to Find Them, based on the Harry Potter “textbook” of the same name published by her. A little over a year later, she announced via Twitter that she was currently optimizing the script and was already working on another novel on the side.

In June 2020, after Joanne Rowling repeatedly referred to biological sex as real in tweets about transsexuality, she was widely criticized or, by her own admission, antagonized as transphobic. She subsequently published a statement on her website describing her own experiences of domestic sexual violence and how these shaped her stance on gender identity. Daniel Radcliffe, Emma Watson, and Eddie Redmayne, who had portrayed characters from her books in their film adaptations, voiced opposition partly before and partly after her statement, as did her American publisher Arthur Levine.

J. K. Rowling Harvard Speech on The Fringe Benefits of Failure, and the Importance of Imagination, [6]