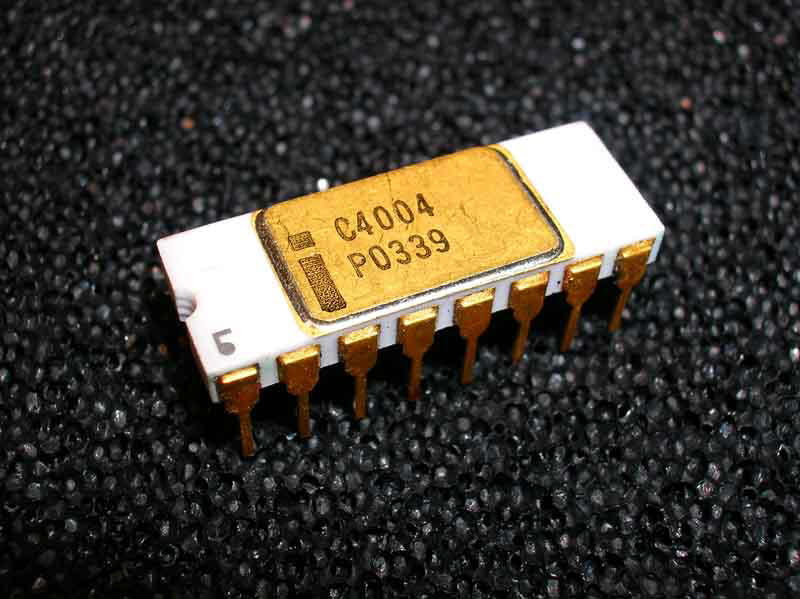 On November 15, 1971, Intel presented the Intel 4004 microprocessor, the world’s very first commercially available 4-bit central processing unit (CPU). It was the first complete CPU on one chip. By the time, this revolutionary microprocessor, the size of a little fingernail, delivered the same computing power as the first electronic computer built in 1946, which filled an entire room. Subsequently, the successors to the 4004 should drive the digital revolution.

A New Set of Chips

Back in 1969, Busicom Crop. of Japan approached chip maker Intel, which had previously made semiconductor memory chips, to design a number of custom designed chips for its new printing calculator. Busicom already had a lot of experience with electronic computers, but was looking for a partner who could integrate the semiconductors even more densely on a chip. At the time, Intel was one of the manufacturers with the greatest available integration density. Intel engineers suggested a family of just four chips, including one that could be programmed for use in a variety of products, setting in motion an engineering feat that dramatically altered the course of electronics. The chief designers of the chip were Federico Faggin and Ted Hoff of Intel, and Masatoshi Shima of Busicom (later Zilog). Intel’s employee Ted Hoff formulated the architectural idea in 1969, but did not take part in the development of the first microprocessor.

Intel designed a set of four chips known as the MCS-4, which included a central processing unit (CPU) chip – the famous 4004 – as well as a supporting read-only memory (ROM) chip for the custom applications programs, a random-access memory (RAM) chip for processing data, and a shift-register chip for the input/output (I/O) port. Federico Faggin, the sole chip designer among the development team on the MCS-4 project, was the only one with experience in MOS random logic and circuit design. He created a new random logic design methodology based on silicon gate, and contributed many technology and circuit design inventions that enabled a single chip microprocessor to become a reality for the first time. His methodology set the design style for all the early Intel microprocessors and later for the Zilog’s Z80. Faggin founded Zilog in 1974, the first company to take on the microprocessor exclusively, and created the architecture of the Z80. Shima joined Zilog and developed the Z80 under Faggin’s direction.

Intel immediately saw the potential of their new development, purchased the rights from Busicom for $60,000 and launched the Intel®4004 processor and its chipset with an advertisement in the November 15, 1971 issue of Electronic News ”Announcing A New Era In Integrated Electronics”, though unconfirmed reports put the date of first delivery as early as March 1971. That’s when the Intel 4004 became the first general-purpose programmable processor on the market – a “building block” that engineers could purchase and then customize with software to perform different functions in a wide variety of electronic devices. 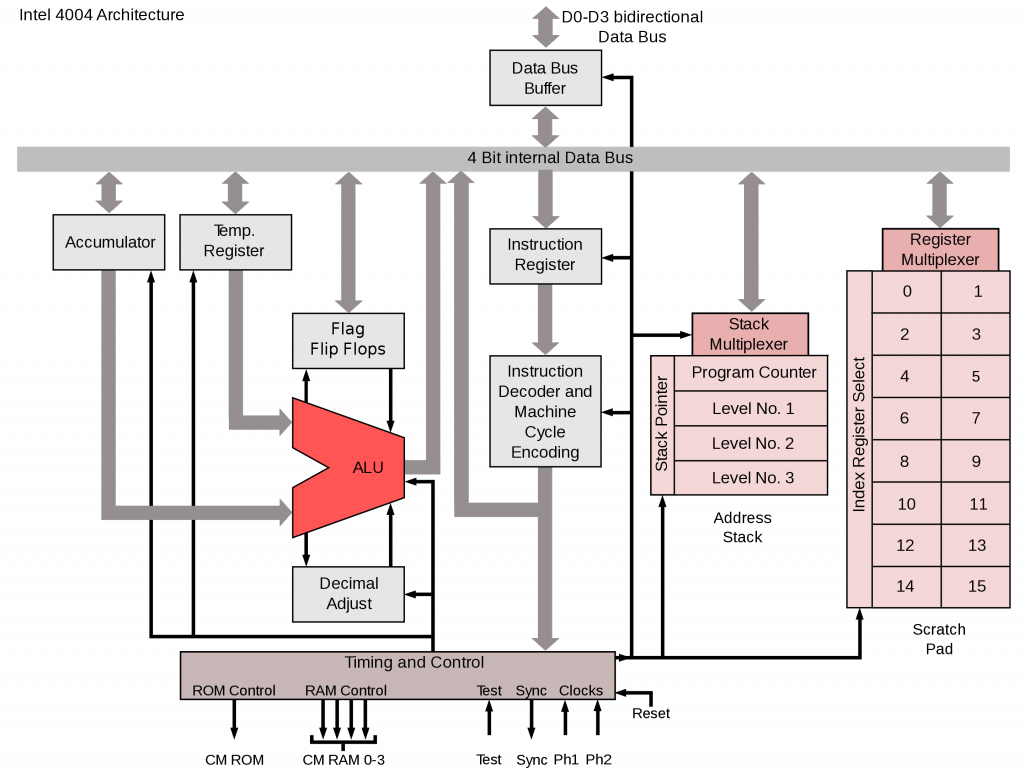 Packaged in a 16-pin ceramic dual in-line package, the Intel 4004 was built of approximately 2,300 transistors. It employed a 10 µm process silicon-gate enhancement load pMOS technology on a 12 mm2 die and could execute approximately 92,000 instructions per second. The 4004 provided separate program and data storage. Contrary to Harvard architecture designs, however, which use separate buses, the 4004, with its need to keep pin count down, uses a single multiplexed 4-bit bus for transferring 12-bit addresses, 8-bit instructions, and 4-bit data words. It was able to directly address 5120 bits (equivalent to 640 bytes) of RAM, stored as 1280 4-bit “characters”. The processor had 16 registers of 4 bits (or 8 of 8 bits) and a CALL and a RET instruction for subroutine calls, with a stack of up to four return addresses. The 4004 was the first commercially available computer processor designed and manufactured by chip maker Intel, which had previously made semiconductor memory chips.  The processor was still in production until 1981. The schematics were released for non-commercial use on 15 November 2006 – 35 years after Intel released the product.

A popular myth says that Pioneer 10, the first spacecraft to leave the solar system, applied an Intel 4004 microprocessor on board. According to Dr. Larry Lasher of Ames Research Center, the Pioneer team actually did evaluate the 4004, but decided it was too new at the time to include in any of the Pioneer projects. Actually, the first commercial product to use a microprocessor was the Busicom calculator 141-PF. The 4004 was also used in the first microprocessor-controlled pinball game, a prototype produced by Dave Nutting Associates for Bally in 1974. In 1974, the 4040 was produced, which offered 14 additional commands, 8 return addresses and a larger address space (8 KBit). Despite being the first multi purpose microprocessor design on a single chip, the Intel 4004 is challenged by a slightly older MOS integrated device, the Central Air Data Computer (CADC) developed by Garrett AiResearch for Grumman and the military fighter jet F-14 Tomcat in 1969-1970. The CADC consisted of an A-to-D converter, several quartz pressure sensors, and a number of MOS-based microchips to compute altitude, vertical speed, air speed, and mach number from sensor inputs such as pitot and static pressure and temperature. [6]

On October 15, 2010, Faggin, Hoff, and Mazor from the original designer team were awarded the National Medal of Technology and Innovation for their pioneering work on the Intel 4004.