You are here: Home › aviation › Igor Sikorsky and the Perfection of the Helicopter Design 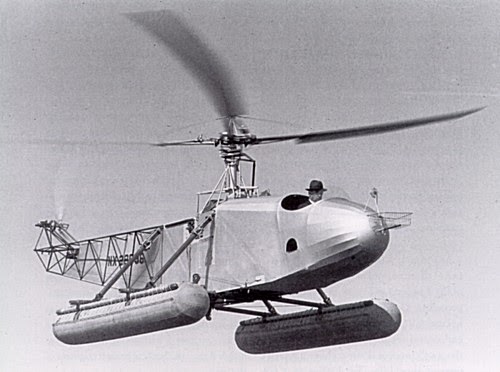 Igor Sikorsky in his VS-300 helicopter

On May 13, 1940, Russian American aviation pioneer Igor Ivanovitsch Sikorsky made the maidenflight with his newly developed helicopter VS-300, which led to the R-4, the world’s first mass-produced helicopter in 1942. Sure we all know helicopters today. They have become an everyday object, although not everybody of us already had the chance to fly with a helicopter. Actually, I had the pleasure to fly as helicopter passenger during my time of service in the air force. I really enjoyed flying on a low profile following the terrain, being also able to look down through the glass that was part of the bottom of the aircraft.

The Bamboo-Copter and the Aerial Scew

The principle of a helicopter is that its wings are not fixed as for a plane. Instead the wings move (rotate) and create a lift. Thus, the helicopter is able to fly also vertically. The principle behind a helicopter actually is rather old. The earliest references for vertical flight have come from China. Since around 400 BC, Chinese children have played with bamboo flying toys. This bamboo-copter is spun by rolling a stick attached to a rotor. The spinning creates lift, and the toy flies when released. It was not until the early 1480s, when Leonardo da Vinci created a design for a machine that could be described as an “aerial screw”, that any recorded advancement was made towards vertical flight. His notes suggested that he built small flying models, but there were no indications for any provision to stop the rotor from making the craft rotate.[4]

In 1861, the word “helicopter” was coined by Gustave de Ponton d’Amécourt, a French inventor who demonstrated a small, steam-powered model. While celebrated as an innovative use of a new metal, aluminum, the model never lifted off the ground. In 1906, two French brothers, Jacques and Louis Breguet, began experimenting with airfoils for helicopters. In 1907, those experiments resulted in the Gyroplane No.1. Although there is some uncertainty about the dates, sometime between 14 August and 29 September 1907, the Gyroplane No. 1 lifted its pilot into the air about two feet (0.6 m) for a minute. The Gyroplane No. 1 proved to be extremely unsteady and required a man at each corner of the airframe to hold it steady.

During the development of his autogiro in 1923, Juan de la Cierva [9] came up with essential solutions for stabilizing the rotor of a rotary-wing aircraft, such as the flapping joints. This concept had been patented in German Reich Patent No. 249702 from 1912 by Max Bartha and Josef Madzsar in connection with head-tilt control for a coaxial rotor. Helicopters were developed and built during the first half-century of flight, with the Focke-Wulf Fw 61 being the first operational helicopter in 1936. [3] The Fw 61 broke all of the helicopter world records in 1937, and Nazi Germany used helicopters in small numbers during World War II for observation, transport, and medical evacuation. But it was not until 1942 that a helicopter designed by Russian-born engineer Igor Sikorsky reached full-scale production, with 131 aircraft built. By the time Igor Sikorsky competed with Lawrence LePageto to produce the U.S. military’s first helicopter. LePage received the patent rights to develop helicopters patterned after the Fw 61, and built the XR-1, an early American twin-rotor helicopter, winner of a United States Army Air Corps design competition held in early 1940. But, the flight testing of the XR-1 proved troublesome.

Sikorski studied at the Naval Military Institute in St. Petersburg. Among his works as chief engineer of the aviation department of Russo-Balt, the Russian-Baltic wagon factory, the largest industrial conglomerate of the Russian Empire with railway, automobile and aircraft production in Riga, Moscow and St. Petersburg, was the first four-engine aircraft, the famous Russki Witjas (Russian warrior), which he himself flew in on 13 May 1913. Sikorski’s planes were used by the Russian army as bombers in World War I. Igor Sikorski emigrated to the USA after the Russian Revolution of 1917, during the Russian Civil War of 1919 at the age of 30. He founded the Sikorsky Aero Engineering Company in 1923 with the support of many emigrated Russians and the financial support of the composer Sergei Rachmaninov, which was later taken over by United Aircraft. The company manufactured flying boats, such as the S-42 “Clipper”, used by Pan Am for transatlantic flights. On February 14, 1929, he filed an application to patent a “direct lift” amphibian aircraft which used compressed air to power a direct lift “propeller” and two smaller propellers for thrust. On June 27, 1931, Sikorsky filed for a patent for another “direct lift aircraft”, and was awarded patent No. 1,994,488 on March 19, 1935. 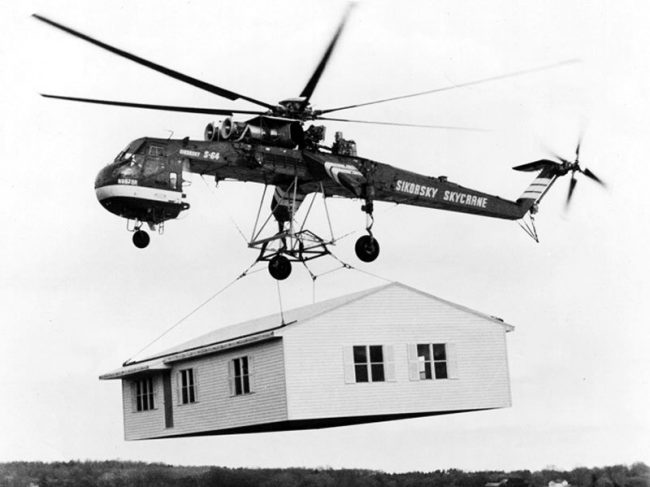 Meanwhile, Sikorsky settled on a simpler, single rotor design, the VS-300, which turned out to be the first practical single lifting-rotor helicopter design. After experimenting with configurations to counteract the torque produced by the single main rotor, Sikorsky settled on a single, smaller rotor mounted on the tailboom. The cyclic control was found to be difficult to perfect, and led to Sikorsky locking the cyclic and adding two smaller vertical-axis lifting rotors to either side aft of the tail boom. By varying pitch of these rotors simultaneously, fore and aft control was provided. Roll control was provided by differential pitching of the blades. In this setup, it was found that the VS-300 couldn’t fly forward easily and Sikorsky joked about turning the pilot’s seat around. Sikorsky fitted utility floats (also called pontoons) to the VS-300 and performed a water landing and takeoff on 17 April 1941, making it the first practical amphibious helicopter.