You are here: Home › chemistry › Henry Taube and the Mechanisms of Electron-transfer Reactions 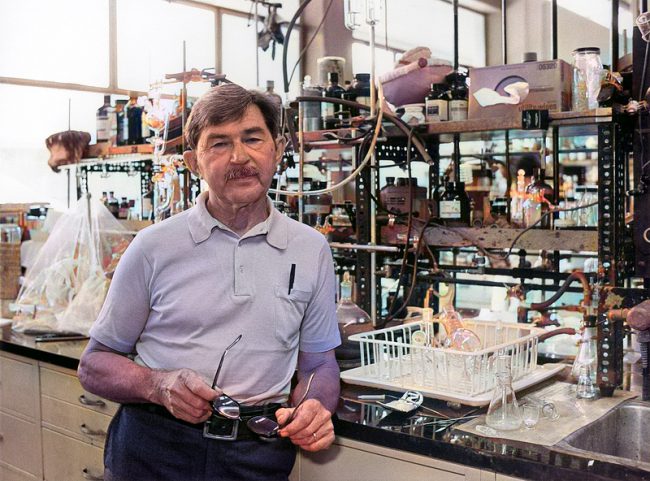 On November 30, 1915, Canadian-born American chemist Henry Taube was born. Taube has been awarded the 1983 Nobel Prize in Chemistry for his extensive research into the properties and reactions of dissolved inorganic substances, particularly oxidation-reduction processes involving the ions of metallic elements. Metals often form complexes, in which other atoms cluster around the metal atom, transferring and sharing electrons among themselves to bind together. Taube discovered that during a reaction, a temporary “bridge” of atoms often forms between metal atoms.

Henry Taube was born in Neudorf, Saskatchewan, Canada, as the youngest of four boys to Samuel Taube and Albertina Tiledetzski, a family of farmers. His German-speaking parents had emigrated from today’s Ukraine to Canada in 1911. At age 12, Taube left his hometown and moved to Regina to attend Luther College where he completed high school. After graduating, Taube stayed at Luther College and worked as laboratory assistant for Paul Liefeld, allowing him to take first year university classes. Taube attended the University of Saskatchewan, receiving his B.Sc. in 1935 and his M.Sc in 1937. His thesis advisor at the University of Saskatchewan was John Spinks. While at the University of Saskatchewan, Taube studied with Gerhard Herzberg, who would be awarded the 1971 Nobel Prize in Chemistry. He moved to University of California, Berkeley, where he completed his Ph.D studies in 1940 under William Bray. Taube’s graduate research focused the ‘photodecomposition of chlorine dioxide and hydrogen peroxide in solution’.

After completing his education, Taube remained in the United States, becoming an instructor in chemistry at Berkeley until 1941. He initially wanted to return to Canada to work, but did not receive a response when he applied for jobs at the major Canadian universities. In 1942 he became a US citizen. From Berkeley, he served as an instructor and assistant professor at Cornell University until 1946.

During World War II, Taube served on the National Defense Research Committee. In 1946, he moved to the University of Chicago, rising to full professor in 1952. In the late 1940s Taube carried out experiments with isotopes to show that in water solution the ions of metals form chemical bonds with several molecules of water and that the stability and geometric arrangement of the resulting hydrates, or coordination compounds, vary widely, depending on the identity and oxidation state of the ion. He also helped to develop other techniques for studying such substances, and he devised an interpretation of their properties in terms of their electronic configurations. Analogous coordination compounds form in the presence of ammonia, chloride ions, or numerous other chemical species, which are called ligands when they engage in these reactions.[1]

The oxidation or reduction of one metal ion by another involves their exchange of one or more electrons. Many such reactions occur rapidly in aqueous solution despite the fact that the stable shells of water molecules or other ligands should keep the two ions from getting close enough for electron exchange to occur directly. Taube showed that, in an intermediate stage of the reaction, a chemical bond must form between one of the ions and a ligand that is still bonded to the other. This ligand acts as a temporary bridge between the two ions, and its bond to the original ion can later break in such a way as to effect—indirectly—the electron transfer that completes the reaction. Taube’s findings have been applied in selecting metallic compounds for use as catalysts, pigments, and superconductors and in understanding the function of metal ions as constituents of certain enzymes.[1]

In the 1960s and 1970s, his work focused on the reactions in the electron transfer of transition metals into solutions. He was able to elucidate that there are two different ways of electron transfer, which he called the outer spherical mechanism and the inner spherical mechanism. For differentiation, he used the observation of the participating ions as the transfer from reduction to oxidation takes place energetically below the activation barrier in the outer spherical mechanism. This is caused by the proximity of the ions to each other and the reconfiguration of the charges in the respective environment (inner coordination sphere) with ions of different charge.

Taube was awarded the 1983 Nobel Prize in Chemistry “for his work on the mechanisms of electron transfer reactions, especially in metal complexes,” being the first Canadian-born Nobel laureate in chemistry. Taube’s Nobel Lecture was entitled “Electron Transfer between Metal Complexes – Retrospective.“. Taube’s win was the first for an inorganic chemist since 1913 (Alfred Werner), breaking a long string of awards to organic chemists. After being awarded the Nobel Prize, Taube noticed a side benefit to the prestigious award – his students paid better attention in class.

He served as chair of the chemistry department in Chicago from 1956–59, but did not enjoy administrative work. After leaving Chicago, Taube worked as a professor at Stanford University until 1986. He became a Professor Emeritus at Stanford in 1986, but he continued to perform research until 2001, and visited his labs every day until his death in 2005.