You are here: Home › chemistry › Henry Moseley and the Atomic Numbers 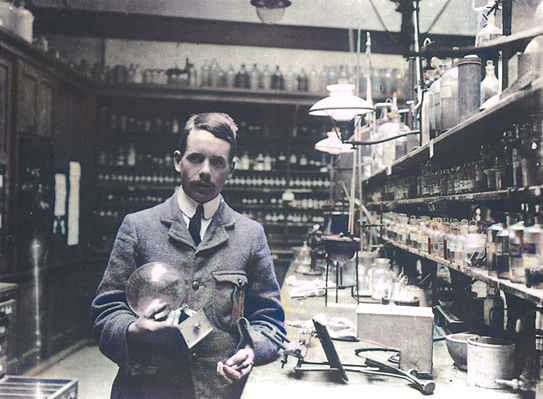 On August 10, 1915, English physicist, Henry Moseley was killed in action. Moseley‘s contribution to the science of physics was the justification from physical laws of the previous empirical and chemical concept of the atomic number. This stemmed from his development of Moseley’s law in X-ray spectra.

“We have now got what seems to be definite proof that an X ray which spreads out in a spherical form from a source as a wave through the aether can when it meets an atom collect up all its energy from all round and concentrate it on the atom. It is as if when a circular wave on water met an obstacle, the wave were all suddenly to travel round the circle and disappear all round and concentrate its energy on attacking the obstacle. Mechanically of course this is absurd, but mechanics have in this direction been for some time a broken reed.”
— Henry Moseley, Letter to Margery Moseley (2 Feb 1913).

The Periodic Table of Elements

For sure you do remember that poster from your classroom with all the chemical elements ordered in the so-called periodic table. But, certainly only a few of you will have heard about Henry Moseley and his concept of the atomic numbers. In chemistry and physics, the existence of a periodic table creates an ordering for the elements, and was first proposed by Russian chemist and inventor Dimitri Mendeleev.[6] The atomic number (also known as the proton number) is the number of protons found in the nucleus of an atom and therefore identical to the charge number of the nucleus. The atomic number uniquely identifies a chemical element. This discovery is thanked to the British physicist Henry Moseley, who justified this empirical and chemical concept of the atomic number also from physical laws. Henry Moseley discovered that the wavelength (energy) of an X-ray depended upon the nuclear charge of an atom.

Henry Moseley was born in Weymouth in Dorset in 1887. His father Henry Nottidge Moseley (1844–91), who died when Henry Moseley was quite young, was a biologist and also a professor of anatomy and physiology at the University of Oxford, who had been a member of the Challenger ExpeditionIn 1906 Henry Moseley entered Trinity College at Oxford University. After graduating, he worked at the University of Manchester with Ernest Rutherford. In his first years there he was mainly occupied with teaching, after a few years he was released from his teaching duties and began to devote himself entirely to research.

In 1913, almost fifty years after Mendeleev has proposed his periodic table of chemical elements, Henry Moseley at the University of Manchester observed and measured the X-ray spectra of 10 elements that occupied consecutive places in the periodic table. These spectra were found by the method of diffraction of X-rays through crystals. Moseley discovered a systematic mathematical relationship between the wavelengths of the X-rays produced in the diffraction process by the targeted elements and their atomic numbers. He concluded that there was

“a fundamental quantity which increases by regular steps as we pass from one element to the next.“

This relationship has become known as Moseley’s law. In 1920, Ernest Rutherford at Cambridge identified this quantity as the atomic number.[5]

The diagram published by Moseley in 1914, which shows linear relationships between an atom’s atomic number and the square root of the frequency of its characteristic x-rays.

Moseley’s formula, on account of Nobel laureate Niels Bohr,[7] not only established atomic number as a measurable experimental quantity, but gave it a physical meaning as the positive charge on the atomic nucleus, i.e. the number of protons of the nucleus. With the discovery of isotopes of the elements, it became apparent that atomic weight was not the significant player in the periodic law as Mendeleev and others had proposed, but rather, the properties of the elements varied periodically with atomic number. When atoms were arranged according to increasing atomic number, the few problems with Mendeleev’s periodic table had disappeared. Because of Moseley’s x-ray work, elements could be ordered in the periodic system in order of atomic number rather than atomic weight.

Killed in World War I

Henry Mosley left Manchester in 1914 to return to Oxford and continue his research there. But after World War I broke out, he joined the Royal Engineers. He was killed in the Battle of Gallipoli at the Dardanelles on the Gallipoli Peninsula on 10 August 1915. Moseley was shot in the head by a Turkish sniper while in the act of telephoning a military order. Only twenty-seven years old at the time of his death, Moseley could, in the opinion of some scientists, have contributed much to the knowledge of atomic structure had he survived. Niels Bohr said in 1962 that Rutherford’s work “was not taken seriously at all” and that the “great change came from Moseley.”

Before Moseley and his law, atomic numbers had been thought of as a semi-arbitrary ordering number, vaguely increasing with atomic weight but not strictly defined by it. Moseley’s discovery showed that atomic numbers were not arbitrarily assigned, but rather, they have a definite physical basis. Moseley postulated that each successive element has a nuclear charge exactly one unit greater than its predecessor. Moseley redefined the idea of atomic numbers from its previous status as an ad hoc numerical tag to help sorting the elements into an exact sequence of ascending atomic numbers that made the Periodic Table exact.