You are here: Home › chemistry › Henry Cavendish and the Weight of the Earth 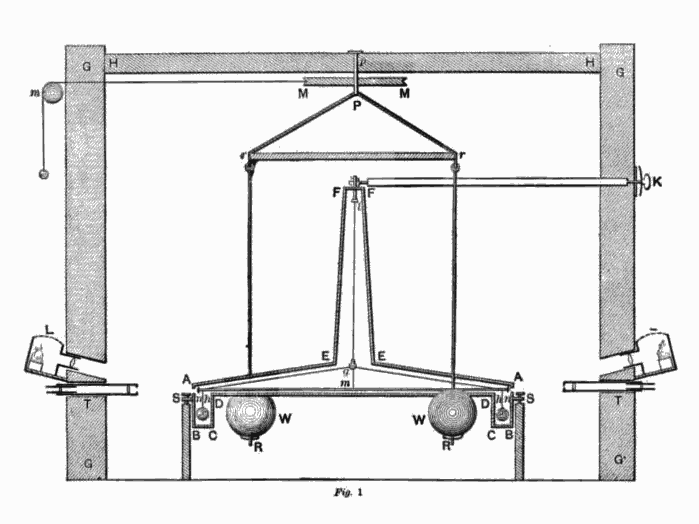 On October 10, 1731, British natural philosopher Henry Cavendish was born. A scientist as well as an important experimental and theoretical chemist and physicist, Cavendish is noted for his discovery of hydrogen or what he called “inflammable air“. Most notably, he determined the mass and density of the Earth.

Henry Cavendish was born in Nice and attended a private school near London. He enrolled the University of Cambridge, but left without a degree three years later in order to experiment in his own laboratory at his family’s home. He was elected to the Royal Society and the Royal Society Club and was active in the Council of the Royal Society of London. [1]

Cavendish actively researched in several scientific fields including mechanics, optics, and magnetism. He combined metals with acids and made hydrogen which he called ‘inflammable air‘ and dissolved alkalis in acids calling it ‘fixed air‘. He further experimented with his creations and collected them in bottles before measuring their solubility in water and their specific gravity, noting their combustibility. For his papers on these experiments, Cavendish was awarded the Royal Society’s Copley Medal. Later in the century, gas chemistry became more important, especially with Antoine-Laurent Lavoisier’s reform of chemistry, generally known as the chemical revolution. Further studies on gases included Cavendish’s 1785 investigation of the composition of air and it is known that his results were pretty accurate back then. The scientist became also interested in the problem of the nature of heat in the 1760s and explained heat as the result of the motion of matter. He developed a general theory of heat, probably in the 1780s, which was mathematical as well as mechanical. The theory included the principle of the conservation of heat and the concept of the mechanical equivalent of heat. [2]

However, the famous Cavendish experiment became the scientist’s best known. It was conducted in 1798 in order to determine the density of the Earth and the device used was a modification of the torsion balance built by the geologist John Michell. The device consisted of a torsion balance with a pair of lead spheres suspended from the arm of a torsion balance and two much larger stationary lead balls as depicted in the picture above. The scientist intended to measure the gravitational attraction between the balls, which he achieved by calculating the period of oscillation of the torsion balance and then using his results to further calculate the density of the Earth. Cavendish found out that on average, the Earth’s density was 5.48 times greater than that of water. His calculations paved the way for others to calculate accurate values for the gravitational constant and Earth’s mass. [3]

At yovisto, you may be interested in a short video lecture explaining the Cavendish Experiment.