You are here: Home › history › To Preserve a Copy of each printed Book – The German National Library 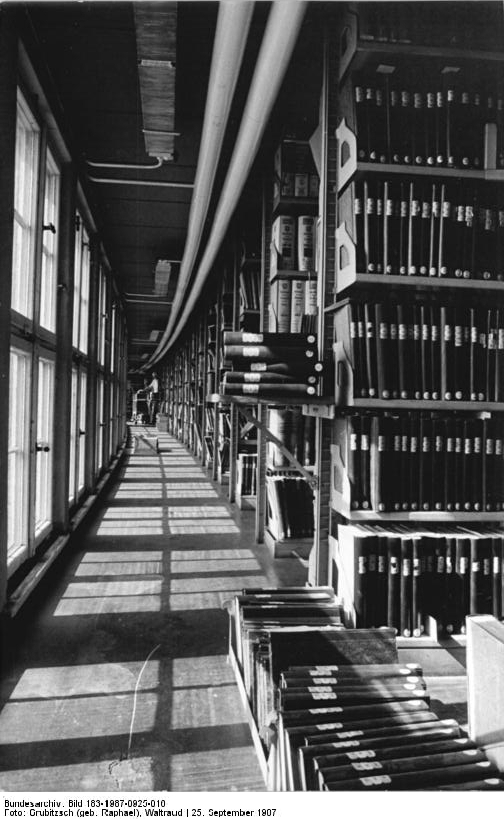 The Concept of a National Library

Today, almost every country has a national library for the preservation of its literary cultural heritage. A national library is a library specifically established by the government of a country to serve as the preeminent repository of information for that country. Unlike public libraries, these rarely allow citizens to borrow books. Often, they include numerous rare, valuable, or significant works. A National Library is that library which has the duty of collecting and preserving the literature of the nation within and outside the country. Thus, National Libraries are those libraries whose community is the nation at large.

The first national libraries had their origins in the royal collections of the sovereign or some other supreme body of the state. The very first national library was established by the French King Francis I. (1494-1547). He issued a decree that ordered all book sellers to give one copy of every book published in France to his ”Bibliotheque du roi“, which was the predecessor of today’s ”Bibliotheque Nationale“. Therefore, national libraries are government libraries with the right to obtain one obligatory copy of every book for archival.

One of the first plans for a national library was devised by the Welsh mathematician John Dee,[6] who in 1556 presented Mary I of England with a visionary plan for the preservation of old books, manuscripts and records and the founding of a national library, but his proposal was not taken up.  Next to the French National Library, the library of Sankt Petersburg in Russia followed in 1810, Florence in Italy in 1865, and 1870 Washington.

In Germany, this deposit copy – “Reichspflichtablieferung” as it was called – was a long term issue of debates. Already in 1848, there had been plans for a German national library. But, chancellor Otto von Bismarck (1815-1898) prevented it by stating that cultural politics is not politics of the German Empire but of the federated states. Until further decision, the stock of books already in existence was stored at the ‘Germanisches Nationalmuseum’ in Nuremberg. Finally, in 1912, in the town of Leipzig, seat of the annual Leipzig Book Fair, the kingdom of Saxony and the Börsenverein der Deutschen Buchhändler (Association of German booksellers) agreed to found a German National Library located in Leipzig. Starting January 1, 1913, all publications in German language were systematically collected (including books from Austria and Switzerland).

After World War II the “Deutsche Bibliothek” in Frankfurt am Main took over the task of the national library in western Germany. With the unification of Germany on 3 October 1990, the Deutsche Bücherei Leipzig and the Deutsche Bibliothek Frankfurt am Main were merged into the new institution “Die Deutsche Bibliothek” collecting all German literature and maintaining the ”Deutsche Nationalbibliografie“. Duties are shared between both facilities with each center focusing its work in specific specialty areas. A third facility, the Deutsches Musikarchiv Berlin (founded 1970), deals with all music-related archiving (both printed and recorded materials). The total holdings of the German National Library amounted to approximately 32.7 million media units at the end of 2016. Together with the Sammlung Deutscher Drucke and the special collections, the German National Library forms a distributed national library for Germany.

In our research we are dealing with automated classification of unstructured data, especially text. Here at SciHi Blog, you might have noticed all the linked references within the texts, providing you with information about the linked entities. This information is drawn from Wikipedia as a reference. Besides the collaborative online encyclopaedia, there are also official authority files, as e.g. the Integrated Authority File (Gemeinsame Normdaten), maintained by the German National Library. The Integrated Authority File or GND is an international authority file for the organisation of personal names, subject headings and corporate bodies from catalogues. It is used mainly for documentation in libraries and increasingly also by archives and museums. The GND is managed by the German National Library in cooperation with various regional library networks in German-speaking Europe and other partners.