You are here: Home › physics › George Green and his Theory of Electricity and Magnetism 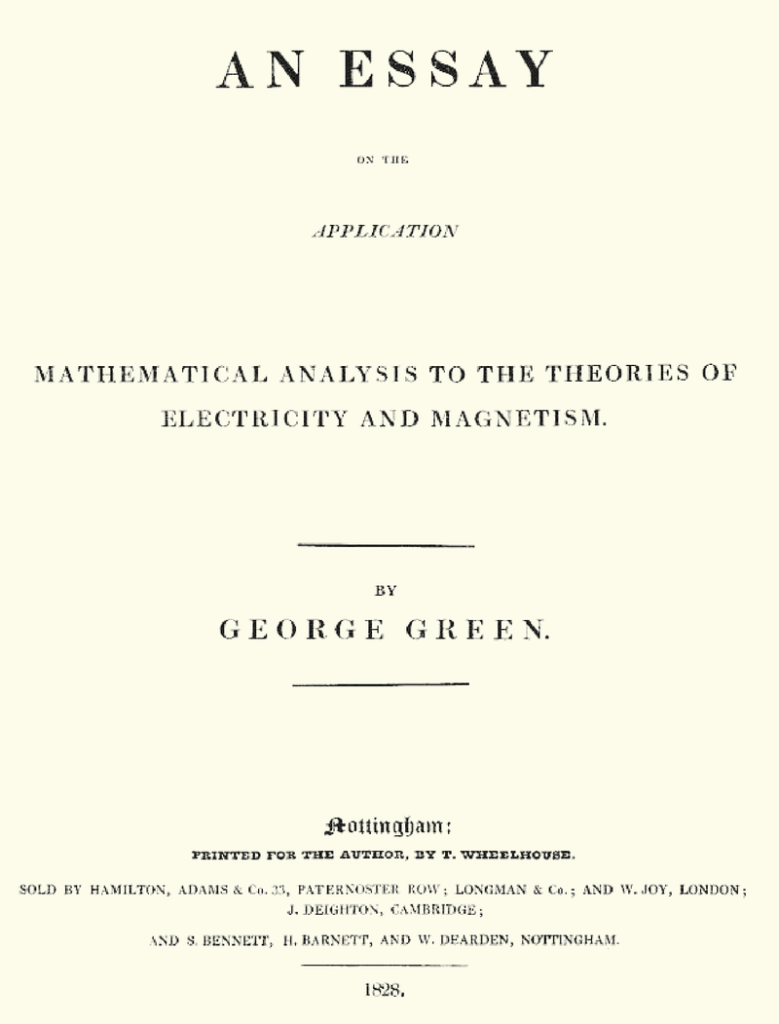 On July 14, 1793, British mathematical physicist George Green was baptized. He is best known for his publication of wrote An Essay on the Application of Mathematical Analysis to the Theories of Electricity and Magnetism, in which he developed a first mathematical theory of electricity and magnetism. His theory formed the foundation for the work of other scientists such as James Clerk Maxwell,[3] William Thomson,[4] and others.

The Son of a Baker

George Green was born and lived for most of his life in the English town of Sneinton, Nottinghamshire, now part of the city of Nottingham. His father, also named George, was a baker who had built and owned a brick windmill used to grind grain had a prosperous business. In September 1800 there were riots in England when food prices were high and people did not have enough to eat. The corn dealers and bakers were blamed for keeping back food until the prices rose even higher. In the course of the riots also George Green‘s bakery was under attack.

Recognizing the young Green’s above average intellect, and being in a strong financial situation due to his successful bakery, his father enrolled him in March 1801 at Robert Goodacre’s Academy, the best and most expensive school in Nottingham. Green stayed for only four terms (one school year), and it was speculated by his contemporaries that he probably exhausted all they had to teach him. It is hard to see quite why Green became interested in mathematics at this age or, for that matter, whether he had access to mathematical works of any type. However, the nine year old boy started to work in his father’s bakery business.

In 1807, George Green senior bought a plot of land in Sneinton. On this plot of land he built a “brick wind corn mill”, now referred to as Green’s Windmill. The mill stood 16 metres high and was one of the first two brick mills in the county of Nottinghamshire. It was technologically impressive for its time, but required nearly twenty-four hour maintenance, which was to become George Green‘s burden for the next twenty years. Green must have continued working on mathematics through the years that he worked at his father’s mill.

Mathematics on the Top Floor of the Mill

In 1823, after his marriage with Jane Smith, the daughter of the Mill’s manager, Green joined the Nottingham Subscription Library which was situated in Bromley House. This was an important event in Green’s scientific development as it gave him access to a few scientific works, but perhaps most importantly of all, it gave him access to the Transactions of the Royal Society of London. In this publication Green could read some of the latest mathematical work and it also reported on works published in other countries.[1] Green studied mathematics on the top floor of the mill, entirely on his own. Yet despite the difficult circumstances – his father and his mother had just died – and despite his flimsy mathematical background, Green published one of the most important mathematical works of all time in 1828.

Green published An Essay on the Application of Mathematical Analysis to the Theories of Electricity and Magnetism (1828) privately at the author‘s expense, because he thought it would be presumptuous for a person like himself, with no formal education in mathematics, to submit the paper to an established journal. When Green published his Essay, it was sold on a subscription basis to 51 people, most of whom were friends and probably could not understand it. The wealthy landowner and mathematician Edward Bromhead bought a copy and encouraged Green to do further work in mathematics. Not believing the offer was sincere, Green did not contact Bromhead for two years.

By 1829, now thirty-six years old, Green had become financially independent and consequently was able to use this wealth to abandon his miller duties and further pursue mathematical studies. For three years Green and Bromhead met and during this time Green wrote three further papers. Two on electricity were sent by Bromhead to the Cambridge Philosophical Society where they were published in 1833 and 1834. The third was on hydrodynamics and this work was published by the Royal Society of Edinburgh in 1836. Through Bromhead, Green got in contact with mathematicians at Cambridge. Bromhead‘s close friends there included Charles Babbage,[5] John Herschel [6] and George Peacock and he suggested to Green in April 1833 that he should consider studying mathematics at Cambridge.[1] Aged nearly forty, Green was admitted as an undergraduate at Gonville and Caius College, Cambridge. He was particularly insecure about his lack of knowledge of Greek and Latin, which were prerequisites. Nevertheless, in the mathematics examinations, he won the first-year mathematical prize and graduated BA in 1838.

Following his graduation, Green was elected a Perse fellow of Caius College in Cambridge, although he apparently made no significant contribution to academic life. It is reported that he set the problem papers for two college examinations but never lectured. [2] In his final years at Cambridge, Green became rather ill, and in 1840 he returned to Sneinton, only to die a year later. Green never knew the importance of his mathematics. That was only realized after his death. In 1845, four years after Green’s death, Green’s work was rediscovered by the young William Thomson (then aged 21), later known as Lord Kelvin, who popularized it for future mathematicians. Green’s work on the motion of waves in a canal anticipates the WKB approximation of quantum mechanics, while his research on light-waves and the properties of the ether produced what is now known as the Cauchy-Green tensor. Green’s functions later also proved useful in analyzing superconductivity.

In his final years at Cambridge, Green became rather ill, and in 1840 he returned to Sneinton, only to die a year later. When Albert Einstein visited his grave in 1930, he expressed his admiration for the little-known scientist and remarked that George Green was more than twenty years ahead of his time.