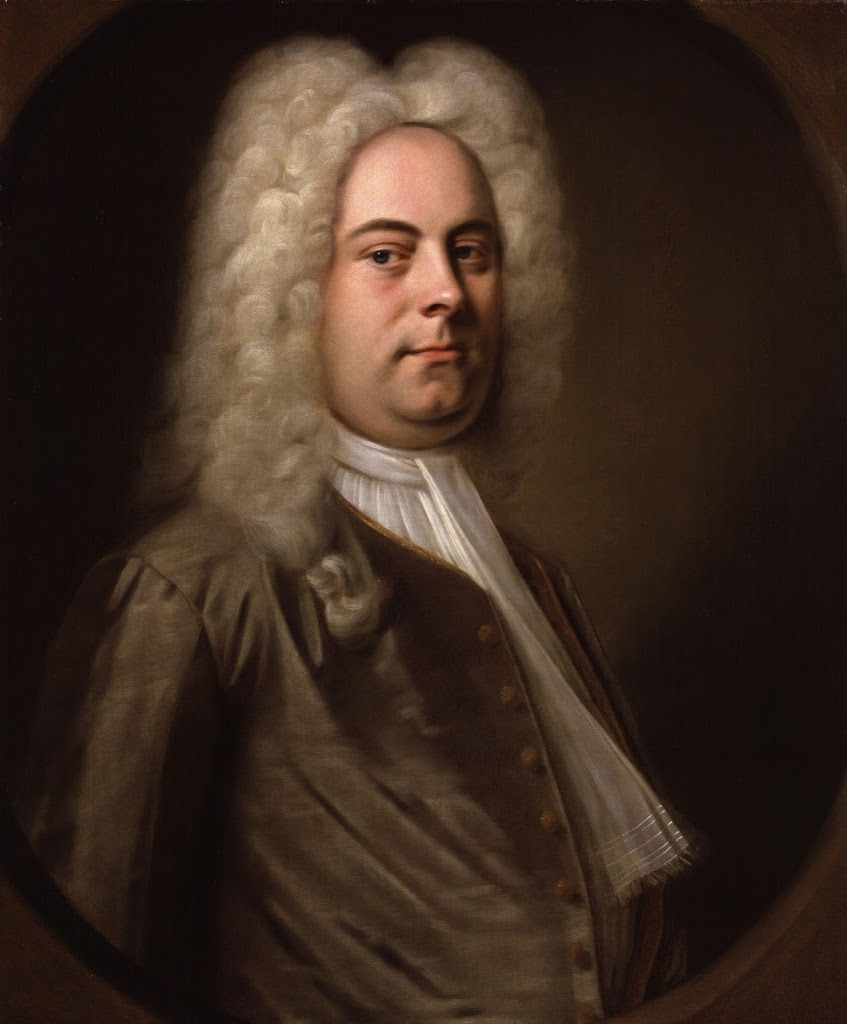 On March 5, 1685, German-born British Baroque composer George Frideric Handel was born, who is famous for his operas, oratorios, anthems and organ concertos. Interestingly, Händel is born in the very same year as Johann Sebastian Bach [4] or Domenico Scarlatti. Nevertheless, Handel is regarded as one of the greatest composers of all time with works like the Water Music or The Messiah that remain popular until today.

“You have taken far too much trouble over your opera. Here in England that is mere waste of time. What the English like is something that they can beat time to, something that hits them straight on the drum of the ear.”
– Georg Friedrich Händel, in conversation with Willibald Gluck [11]

George Friedrich Händel was born on March 5, 1685, (or February 23 according to the old julian calendar) in Halle, Duchy of Magdeburg, to Georg Händel, a Barber-Surgeon, and Dorothea Taust. From an early age, Handel longed to study music, but his father, who was already age 63 when Georg Frederick was born, objected, doubting that music was a realistic source of income and intended to let his son study civil law instead. But he found means to get a little clavichord privately and managed to became a skillful performer. Finally, it was Duke Johann Adolf I., who succeeded to convince Handel’s father to allow him to take lessons in musical composition and keyboard technique from Friedrich Wilhelm Zachow, the organist of Halle’s Marienkirche. Zachow composed music for the Lutheran services at the church, and from him Handel learned about harmony and counterpoint by copying and analyzing scores.

In 1703 Handel accepted a position as violinist and harpsichordist in the orchestra of the Hamburg Oper am Gänsemarkt, where he already produced his first two operas in 1705. Handel travelled to Italy in 1706 where he met the famous composer Archangelo Corelli, from whom he learned much about composing for instruments, as well as Domenico and Allesandro Scarlatti, from whom he learned much about writing for solo voices. During a second visit to Venice, he met several persons interested in England who no doubt influenced his decision to try his luck as a freelance musician in London later on. Handel’s return to Hanover, four years later, was to assume the post of Kapellmeister to the German prince Georg, the Elector of Hanover. By the end of 1710 Handel had left for London, where with Rinaldo, he once again scored an operatic triumph. After returning to Hanover he was granted permission for a second, short trip to London, from which, however, he never returned and decided to settle permanently in England. When in 1714 his former employer prince Georg became King George I. of England, Handel had to face the consequences of his escape from Hanover. But the two men is said to have reconciled during a royal party on the River Thames in 1717, during which the F major suite from Handel‘s new Water Music was probably played.

Painting of George Frideric Handel (left, with right arm extended) with King George I of Great Britain, traveling by barge on the Thames River while musicians play in the background. The painting is an artist’s rendering of the first performance of Handel’s Water Music in 1717.

Winning the Support of the King

By 1719 he had won the support of the king to start the Royal Academy of Music for performances of opera, which presented some of Handel’s greatest operas: Radamisto (1720), Giulio Cesare (1724), Tamerlano (1724), and Rodelinda (1725). His operas were numerous and well-received, but despite their success the academy did not prosper. In 1723 Handel moved into a newly built house at 25 Brook Street, London, which he rented until his death in 1759. This house is now the Handel House Museum, open to the public with an events programme of Baroque music. It was here that he composed The Messiah and Music for the Royal Fireworks. In 1727 finally, he became a naturalized British subject. In April 1737, at age 52, he suffered a stroke or some other malady which left his right arm temporarily paralyzed and stopped him from performing. He retired and went to Aix-la-Chapelle (Aachen), taking hot baths and playing organ for the audience.

Georg Friedrich Händel never married, and kept his personal life very private. Unlike many other composers, he left a sizable estate at his death, worth £20,000 – an enormous amount for the day – which for the most part he passed on to a niece in Germany. Before his death he lost his eyesight because of cataracts. Georg Friedrich Händel was a remarkable composer. Handel underwent several unsuccessful eye operations. There is evidence that Handel was able to see again at times during his last years, but after May 1752 he practically did not regain his sight. Nevertheless he continued to participate in the performances of his oratorios and played his organ concertos between the acts, some of which he improvised. He also composed new arias or reworked older ones. In April 1759 Handel had planned a stay at a health resort in Bath, but this did not happen again. On the morning of 14 April 1759, on a Holy Saturday, Handel died at the age of 74. He left behind – depending on the conversion – two to six million euros, invested in securities. He was buried at Westminster Abbey. It was said that over 3,000 people attended his funeral.

The Decline of Italian Opera

After his death, Handel’s Italian operas fell into obscurity, except for selections such as the aria from Serse, “Ombra mai fù“. His oratorios continued to be performed but not long after Handel’s death they were thought to need some modernisation, and Mozart orchestrated German versions of Messiah and other works. Throughout the 19th century and first half of the 20th century, particularly in the Anglophone countries, his reputation rested primarily on his English oratorios, which were customarily performed by choruses of amateur singers on solemn occasions. The centenary of his death, in 1859, was celebrated by a performance of Messiah at The Crystal Palace,[6] involving 2,765 singers and 460 instrumentalists, who played for an audience of about 10,000 people.

Handel has generally been accorded high esteem by fellow composers, both in his own time and since. Bach attempted, unsuccessfully, to meet Handel while he was visiting Halle. Mozart is reputed to have said of him, “Handel understands affect better than any of us. When he chooses, he strikes like a thunder bolt.” To Beethoven he was “the master of us all… the greatest composer that ever lived. I would uncover my head and kneel before his tomb.” Beethoven emphasized above all the simplicity and popular appeal of Handel’s music when he said, “Go to him to learn how to achieve great effects, by such simple means.”