You are here: Home › literature › Friedrich Dürrenmatt’s ‘The Physicists’ 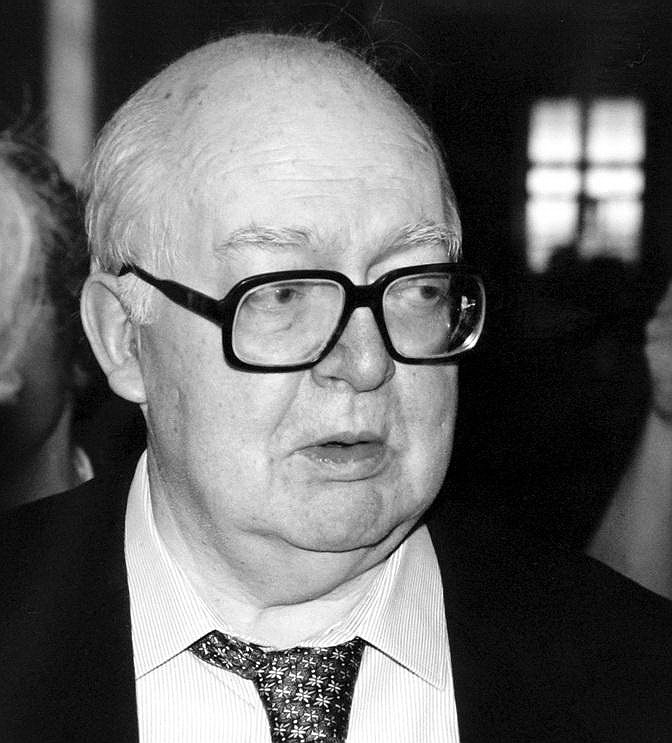 On January 5, 1921, Swiss author and dramatist Friedrich Dürrenmatt was born. Dürrenmatt was a proponent of epic theatre whose plays reflected the recent experiences of World War II. The politically active author‘s work included avant-garde dramas, philosophical crime novels, and macabre satire. Especially his play “The Physicists” (1961) deals with questions of scientific ethics and humanity‘s ability to handle its intellectual responsibilities.

“A story is not finished, until it has taken the worst turn.” (Friedrich Dürrenmatt)

Friedrich Dürrenmatt was born in Konolfingen, a small town about thirteen miles from Bern in the Emmental in Switzerland, the son of a Protestant pastor. The family moved to Bern in 1935. Dürrenmatt began studies in philosophy, German language and literature at the University of Zurich in 1941, but moved to the University of Bern after one semester. It was here that he first became interested in playwriting after becoming a regular patron of the operettas. Among his favorite playwrights were Aristophanes and Thornton Wilder.[3] In December 1943 he was on the point of transferring from the University of Zürich to the University of Bern, where he intended to write a doctoral dissertation on “Kierkegaard and the Tragic“, when he suddenly decided to turn to writing as a career and dropped his academic career. In 1945–46, he wrote his first play It is Written, which premiered to great controversy. The story of the play revolves around a battle between a sensation-craving cynic and a religious fanatic who takes scripture literally, all of this taking place while the city they live in is under siege. The play’s opening night in April 1947, caused fights and protests in the audience.

First, Dürrenmatt struggled to earn a living as a writer and had to turn to the writing of short stories, mystery novels, and radio plays to make ends meet, but he never gave up writing for the stage. His first major success was the play Romulus the Great. Set in the year A.D. 476, the play explores the last days of the Roman Empire, presided over, and brought about by its last emperor, Romulus Augustulus. His real breakthrough then came in 1952 with the comedy The Marriage of Mr. Mississippi in which he first began to formulate his own unique style of theatre, a dark, dreamlike world populated by characters who, though frighteningly real, are often distorted into caricature.[3] The Visit (Der Besuch der alten Dame, 1956) is a grotesque fusion of comedy and tragedy about a wealthy woman who offers the people of her hometown a fortune if they will execute the man who jilted her years earlier. It was such a success that productions sprang up in England and America over the next two years.

“The stage is always the author’s teacher, and he can learn from it.” (Friedrich Dürrenmatt)

His relationship to his native land is, in a very important and fundamental sense, ambivalent. He loved the physical attributes of the land and the landscape, and clearly the peace of the countryside was important to him, but he was at odds with the narrow-minded mentality of the Swiss people and the political organization and climate of the Swiss nation, which at one point he characterized as claustrophobic.[1] His technique was clearly influenced by the German expatriate writer Bertolt Brecht,[7] as in the use of parables and of actors who step out of their roles to act as narrators. Next to Brecht, Dürrenmatt has been called the “most original theorist” of the epic theatre. Dürrenmatt’s vision of the world as essentially absurd gave a comic flavor to his plays.[2]

Most prominent among Dürrenmatt’s plays probably is the satirical drama The Physicists (Die Physiker, 1962), which deals with issues concerning science and its responsibility for dramatic and dangerous changes to the world. The global annihilation of humanity was an imminent threat by that time: in the wake of the Korean war, the frantic armaments race and increasing belligerence had brought the superpowers to several confrontations and to the brink of nuclear war. The question of the scientists’ responsibility towards humanity at large was very much in the fore of public discourse, especially since the United States had actually used atomic bombs.[4]

The story is set in the drawing room of Les Cerisiers sanatorium, an idyllic home for the mentally ill, run by famed psychiatrist Mathilde von Zahnd. This drawing room connects to three rooms, each of which is inhabited by a mentally ill patient. These three men, all physicists by trade, are permitted use of the drawing room, where they are periodically monitored by the female nurses that are charged with their care. The first patient is Herbert Georg Beutler, and he believes that he is Sir Isaac Newton.[9] The second patient is Ernst Heinrich Ernesti, who believes himself to be Albert Einstein.[10] The third patient is Johann Wilhelm Möbius, and he believes that he is regularly visited by the biblical King Solomon. When the play begins, “Einstein” has just killed one of his nurses, and the police are examining the scene. It is revealed through their discussion that this is the second slaying of a nurse by one of these three patients in just three months, the first having been committed by “Newton”. The serious subject behind this farce is what to do with the knowledge of weapons of mass destruction once let out of the genie’s bottle. Who controls this dangerous knowledge? Can scientists remain free, even in the free world?[6]

“The difference between humans and wild animals is that humans pray before they commit murder.” (Friedrich Dürrenmatt)

In 1970 Dürrenmatt wrote that he was “abandoning literature in favour of theatre,” no longer writing plays but working to produce adaptations of well-known works. In addition to plays, Dürrenmatt wrote detective novels, radio plays, and critical essays.[2] His later plays of note include Play Strindberg (1969), Die Frist (“The Appointed Time,” 1977), Achterloo, and Oedipus (1989). Dürrenmatt died from heart failure on 14 December 1990 in Neuchâtel at age 69.