You are here: Home › psychology › Freedom within Limits – the Education Principles of Maria Montessori 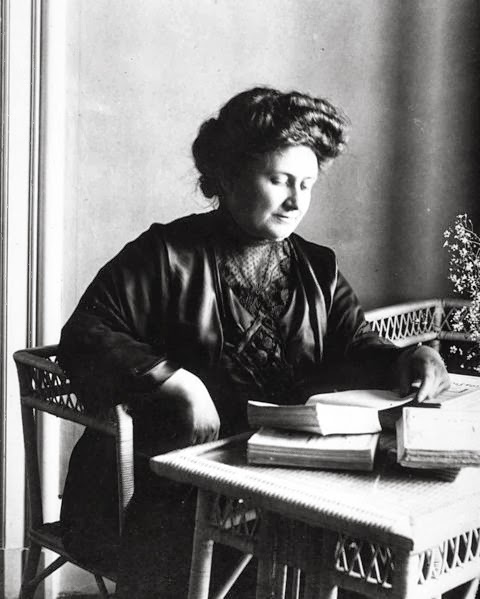 On August 31, 1870, Italian physician and educator Maria Tecla Artemesia Montessori was born. She is probably best known for the philosophy of education that bears her name, and her writing on scientific pedagogy. Her educational method is in use today in public and private schools throughout the world.

We discovered that education is not something which the teacher does, but that it is a natural process which develops spontaneously in the human being. – Maria Montessori

Montessori’s family belonged to the educated middle classes. Her father Alessandro Montessori worked in the Ministry of Finance and ran the state tobacco factory. Her great uncle was the Catholic theologian and geologist Antonio Stoppani. His theory of the connection between theology and the natural sciences is the basic idea behind her education. Already in her school days Maria Montessori was interested in natural sciences and therefore attended a technical high school against the resistance of her conservative father. After graduating from high school, she tried to study medicine. Women in Italy had generally been able to study at universities since 1875. But she was rejected by the university, since medical studies were reserved for men. Therefore she studied natural sciences at the University of Rome from 1890 to 1892. After her first university degree, she finally succeeded in studying medicine. In 1896 she finally earned her doctorate at the University of Rome.

After receiving her doctorate in medicine, Montessori started a position in a hospital, working with mentally ill children and earning herself a reputation in the field. She started giving lectures and advocated women’s rights as well as those for children with mental diseases. The work with disabled kids highly influenced and shaped Maria Montessori. She began to focus on this field of research and was influenced by the works of Edouard Seguin and Jean Marc Gaspard Itard. They led her the way to establish new ideas on working with children who didn’t have to be mentally disabled but indeed showed learning problems. Her reputation kept growing as her scientific publications were a huge success. Working with the disabled, she also learned how to interact with “regular” children and designed novel studying methods, which was an immediate success.

New Ideas in the Classroom

Montessori began practicing and observing was that children needed much more space and time to get creative and study more efficiently than permanently regulating them. She insisted on smaller furniture only for children in the classroom and saw the importance of the mixture of sports, intellectual studies and manual work during the day. Her methods began spreading and several schools, functioning after her suggestions were opened, which was not only noticed by parents, but also by journalists around the country. In the 1910s, Montessori’s ideas were noticed across Europe and her work was published everywhere she wished to. In the United States, her methods were seen as controversial and many high positioned officials criticized them, which led to numerous debated throughout the country. However, most governments around the world supported her efforts. In the 1930s, Montessori came into conflict with the Italian government due to her peace advocating speeches and she left Italy.

The Montessori method is often described as a philosophy that focuses on the child and its individuality. Maria Montessori believed in the intrinsic value of the child. Comparisons with traditional standards are not desirable in Montessori practice. Instead, Montessori proponents believe that children should learn freely, without disability or evaluation. She believed that both rewards and punishments are harmful to people’s inner attitudes, that children naturally want to learn from their own motivation. Above all because it is in their nature to want to participate in (adult) life. 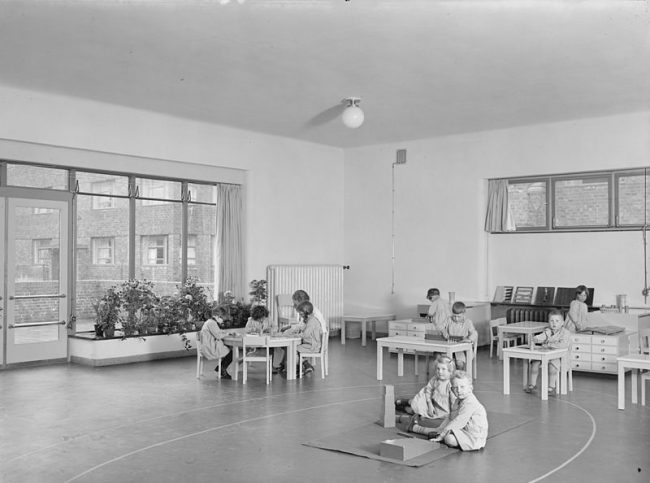 The Montessori method concentrates as pedagogy on the needs, talents and gifts of the individual child. Montessori teachers and educators believe that children learn best at their own pace and in their own way. Children are encouraged to control the pace, subject and repetition of lessons independently. It is assumed that any deviation from the divine child’s ideal is a disorder that can be corrected (normalized) by the use of learning methods. According to Maria Montessori herself, her pedagogy or the so-called Montessori method is “a complex pedagogical and social movement that has arisen directly from and through the revelation of the child”.

The leitmotif of the method is to nurture the child’s natural joy of learning. According to Montessori, this joy of learning is a core part of the nature of each child. Supported and guided with respect and esteem, it leads to the development of a calm and balanced personality. Children who learn at their own pace and following their own interests experience self-confidence and independence and thus internalize what they have learned best. Independence is supported by the work of daily life. Montessori kindergarten children learn to dress themselves, to wash themselves, to prepare the dining table, etc. The children can usually choose for themselves who they want to work with and what they want to work on. The Montessori method always focuses on the learner as the leader of his or her own development.

For Maria Montessori it was a priority to offer the child the opportunity to develop all his senses in a prepared environment adapted to his psychological needs. It is particularly important that the teachers also see themselves as learners and that they take into account each child’s own rhythm and recognize what they are dealing with. For example, it is possible that a child does not use mathematics with the materials provided, but does so when measuring, when building a machine. In order not to let the mutual influence of the two learners slide in undesirable directions, the use of supervision is absolutely necessary.

Throughout the rest of her life, Maria Montessori continued teaching, lecturing and expanding her theories. She was awarded the Nobel Peace Prize and honored numerous times by organizations around the globe. She passed away on May 6, 1952.

At yovisto academic video search, you may enjoy a video lecture titled Lets get serious about teacher quality by Stephen Dinham.