You are here: Home › photography › Frederick Scott Archer and the Collodion Process 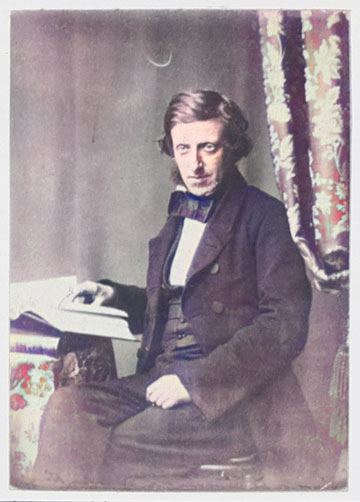 Frederick Scott Archer was born in 1813 in in Bishop’s Stortford, UK, a butcher’s son, began his professional career as an apprentice silversmith in London, then turned to portrait sculpture. To assist him in this work, he began experimenting with the calotype photographic process of William Henry Fox Talbot.

The calotype (from ancient Greek καλός kalós “beautiful”) is a method of photography invented around 1835 by the William Henry Fox Talbot [2]. It is a negative process, i.e. a negative is first created when photographing. Because the calotype was the first to offer the possibility of producing any number of prints, this was a key technique. Talbot achieved this by waxing the initial photograph, thus obtaining a transparent negative which he could transfer to another photosensitive paper and thus create a positive image. The contact print of a calotype can also be made on modern photographic paper. Talbot used iodine-silver paper for the photograph: silver nitrate and potassium iodide were coated onto a thin paper, where they produced a silver iodide compound. Talbot placed pieces of paper coated with light-sensitive silver iodide in small cameras (mouse traps), which produced a negative image after exposure. Talbot had discovered that he could make a latent negative visible on a strongly exposed paper if he treated it with a developer solution of gallic acid and silver nitrate. The process was accelerated by heating. The negative was then fixed with potassium bromide or sodium thiosulfate. To make a positive print from the paper negative, he soaked the paper in hot wax to make it transparent. Now any number of positives could be produced with contact prints on further calotype sheets.

As an improvement of the process, Frederick Scott Archer used collodion from 1848 and in 1851 he published a detailed description of the collodion wet plate which he developed from it. To make a collodion wet plate, the glass plates are cleaned very carefully and a solution of collodion wool and iodine and bromine salts in ethanol and ether is poured over them. The coating dries to a gelatinous mass and is immediately placed in a solution of silver nitrate in the dark. Here the iodine salts are transformed into silver iodide and silver bromide, and these remain finely dispersed in the collodium layer. 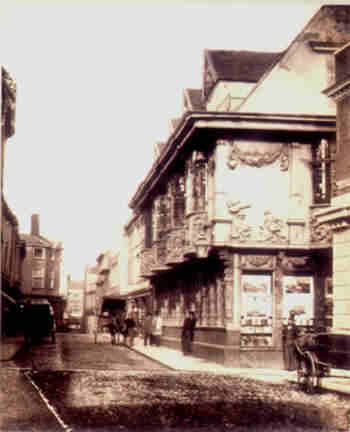 The plate prepared in this way is removed from the silver bath and, still wet from the silver solution attached, is brought into the camera in a light-proof box (cassette), where it is exposed to light and then poured over with an iron sulphate solution in the darkroom. This solution immediately precipitates metallic silver as a dark powder from the silver nitrate solution hanging on the plate, and the more intense the light, the stronger the powder adheres to the exposed areas of the plate. The image is further intensified after this precipitation by adding a mixture of ferrous sulphate and lemon acid silver solution, which causes a second precipitation of silver particles which are deposited on the first precipitated ones, so that the image is now sufficiently opaque in the densest areas to prevent the passage of light during the copying process.

The negative is now fixed, i.e. the silver iodide silver bromide still contained is dissolved out by a solution of sodium thiosulfate, finally washed and coated with alcohol varnish. In the glass negative thus obtained, the light parts of the original appear dark and the dark parts of the original appear light (when viewed through). In front of a dark background it appears as a positive image in that the black background becomes visible in the transparent parts and against this the grey silver powder, which lies on the dense parts of the negative, appears as white (ambrotype).

This positive effect came out best when the image was slightly underexposed. Thus, positives were produced by applying the collodion on dark leather or black wax canvas (pannotypes) on black painted iron sheet (ferrotypes) as carrier material.

Disputes with Le Gray and Talbot

Archer refrained from applying for a patent for his invention, but disputes arose with Le Gray and Talbot over the copyright of the process. However, after the Patent Office rejected the claims to a patent by Le Gray and Talbot, the collodion wet plate could be used freely. So good and complete was Archer’s method that in three or four years it practically displaced both calotype and daguerreotype, and reigned supreme from 1855 to 1880. The inventor took up photography professionally, opening a studio in Great Russell Street, near the British Museum; but he made no money by photography. Among other inventions devised by Archer is also a camera, within which the plates could be developed and fixed, as well as exposed; a triplet lens; and a useful method of whitening positives on glass by soaking them in mercury bichloride. This was called the “alabastrine process.”[5]

Frederick Scott Archer died impoverished, as since he did not patent the collodion process he made very little money from it. An obituary described him as “a very inconspicuous gentleman, in poor health.” Up to about 1853 a photograph was considered a curiosity; but the introduction and perfection of the collodion process made popularization of photography, for the first time, a really popular pursuit. With mistaken ideas as to the ease of the new method, large numbers of amateurs purchased the necessary materials; and, about 1858, the camera became a common object .