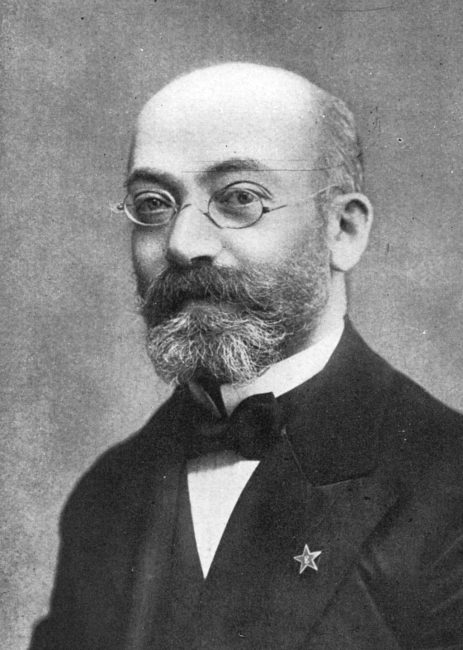 On November 24, 1887, the first German translation of Ludwik Lejzer Zamenhof‘s ‘Unua Libro‘, the first book to describe the artificial universal language esperanto was published. Esperanto is a constructed international auxiliary language. It is the most widely spoken constructed language in the world.

“Esperanto was a very useful language, because wherever you went, you found someone to speak with.”
— George Soros “How Do You Say ‘Billionaire’ in Esperanto?” [5]

Zamenhof was born on December 15, 1859 (according to today’s Gregorian calendar) in the Polish city Białystok, then part of the Russian Empire, an ethnically mixed city where Poles, Belarussians, some Germans and, above all, Yiddish-speaking Jews lived. He worked as a language teacher for French and German, wrote teaching materials, had a language school at times, was a school inspector and censored publications for the Russian Empire. Finally, he was awarded the title of State Councillor. He studied medicine, first in Moscow and later, because of the growing anti-Semitism in Russia, in Warsaw, where he also received his doctorate. Later he specialized in ophthalmology in Vienna, among other places.

The Dream of a Universal Language

Even as a child, Zamenhof was interested in foreign languages. His father’s preferred language was Russian, his mother’s Yiddish, and he may have learned Polish on the street. He probably got to know German and French at an early age, then Greek, Latin and English at school. In addition, he must have mastered Hebrew well, from which he later translated the Old Testament into Esperanto. He dreamed early on of a new, easy-to-learn language that could provide a neutral instrument for the divided human race. His first attempt was the Lingwe Uniwersale, which is only fragmentarily handed down today, in which he sang a song with his friends on his 18th birthday in 1878.

The Birth of Esperanto

By 1885 Zamenhof had finished his final draft, which he published in 1887 in various languages, first in Russian on 26 July[12]. The German title was “Internationale Sprache” (International Language), and this was the initial name of the language. Since Zamenhof feared for his reputation as a doctor, he published the forty-page brochure under the code name Dr. Esperanto. (Esperanto literally means “a hopeful person”). Soon, however, this pseudonym became established as a synonym for the language itself.

In his Unua Libro, Zamenhof simultaneously formulated three goals for his language:

According to Zamenhof, he created the language to foster harmony between people from different countries. After some ten years of development, which Zamenhof spent translating literature into Esperanto as well as writing original prose and verse, the first book of Esperanto grammar was published in Warsaw on the 26th of July 1887. The number of speakers grew rapidly over the next few decades, at first primarily in the Russian Empire and Central Europe, then in other parts of Europe, the Americas, China, and Japan. In the early years, speakers of Esperanto kept in contact primarily through correspondence and periodicals, but in 1905 the first world congress of Esperanto speakers was held in Boulogne-sur-Mer, France. Since then world congresses have been held in different countries every year, except during the two World Wars. Since the Second World War, they have been attended by an average of more than 2,000 people and up to 6,000 people.

The International Language for Russians—the first textbook of Esperanto.

Esperanto on the Rise

In the early years, the autonomous territory of Neutral Moresnet, between what is today Belgium and Germany, had a sizable proportion of Esperanto-speakers among its small and multiethnic population and there was a proposal to make Esperanto its official language. However, neither Belgium nor Prussia had ever surrendered its original claim to it. Further, Germany in particular was taking a more aggressive stance towards the territory and was accused of sabotage and of obstructing the administrative process in order to force the issue. After World War I, there was a proposal for the League of Nations to accept Esperanto as their working language, following a report by Nitobe Inazō, an official delegate of League of Nations during the 13th World Congress of Esperanto in Prague. Ten delegates accepted the proposal with only one voice against, the French delegate, Gabriel Hanotaux. It is believed that Hanotaux did not like how the French language was losing its position as the international language and saw Esperanto mostly as a threat, effectively wielding his veto power to block the decision. However, two years later, the League recommended that its member states include Esperanto in their educational curricula. For this reason, many people see the 1920s as the heyday of the Esperanto movement.

During the 20th century, Esperanto attracted the suspicion of many totalitarian states. The situation was especially pronounced in Nazi Germany, Francoist Spain up until the 1950s, and in the Soviet Union from 1937 to 1956.