You are here: Home › physics › Ernest Rutherford Discovers the Nucleus 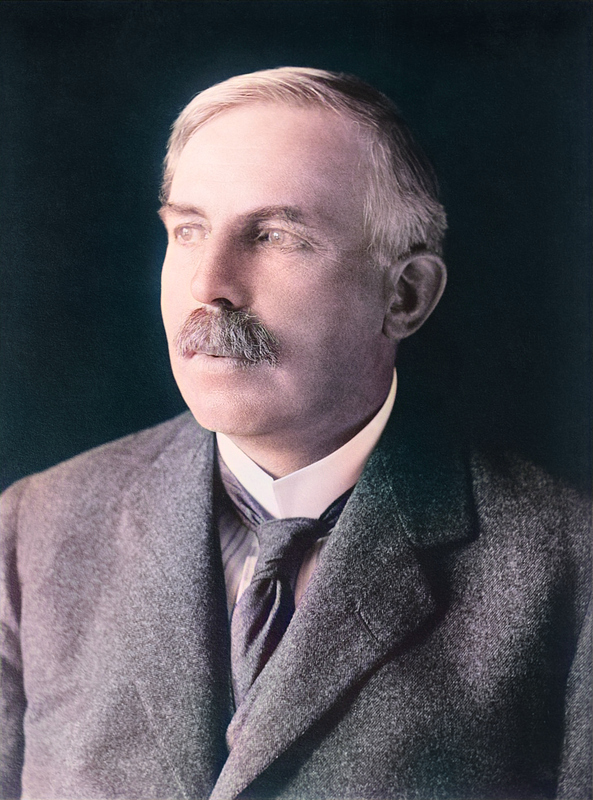 Ernest Rutherford was born on August 30, 1871, as the fourth child of 12 born to James Rutherford, a farmer, and his wife Martha Thompson, originally from Hornchurch, Essex, England, who had emigrated emigrated to New Zealand. His first name was mistakenly spelled ‘Earnest’ when his birth was registered. At age ten Ernest received his first science book. Among the many suggested experiments in it, one, on using the speed of sound to determine the distance to a firing cannon, gave him the knowledge to surprise his family by estimating the distance to a lighting flash. Perhaps it was also this book which inspired him to make a miniature cannon out of a hat peg, a marble and blasting powder. The cannon exploded, luckily without causing injury. Martha Rutherford ensured that all her children were well prepared for school and all received good educations. In 1887 Ernest won, on his second attempt, the Marlborough Education Board scholarship to Nelson College. In 1889 he was head boy, played in the rugby team and, again on his second attempt, won a scholarships at the University of New Zealand. He graduated M.A. in 1893 with a double major in Mathematics and Physical Science, and he continued with research work at the College for a short time, receiving his Bachelor of Science degree the following year. 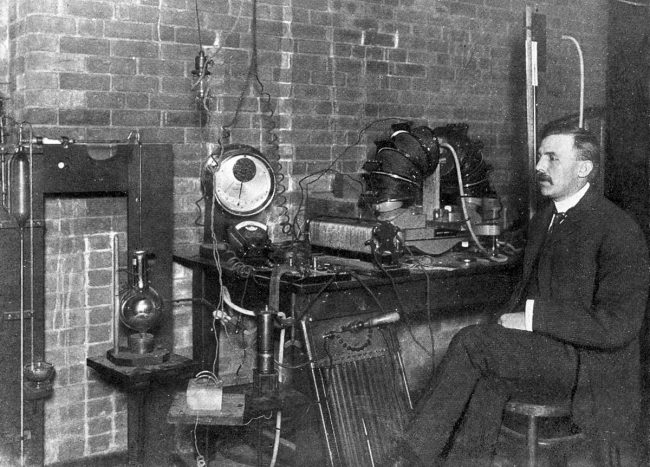 The same year he was awarded a Scholarship, enabling him to go to Trinity College at the University of Cambridge as a research student at the Cavendish Laboratory under J.J. Thomson.[10] There, he briefly held the world record for the distance over which wireless waves were detected. During the investigation of radioactivity, he coined the terms alpha, beta and gamma rays. In 1897, Rutherford was awarded his B.A. Research Degree at Trinity College. In 1898, Rutherford left for Canada to take up a professorship at McGill University in Montreal, which boasted one of the best-equipped laboratories in the Western Hemisphere. There, he did the work that should gain him the 1908 Nobel Prize in Chemistry, demonstrating that radioactivity was the spontaneous disintegration of atoms. Rutherford noticed that in a sample of radioactive material, it invariably took the same amount of time for half the sample to decay – its so-called “half-life” – and created a practical application for this phenomenon using this constant rate of decay as a clock. The half-life ranges from seconds to billions of years and is unique for each radioelement and thus an excellent identifying tag. This phenomenon could then be used to help determine the actual age of the Earth that turned out to be much older than most scientists at the time believed. This also led Rutherford to his famous ironic remark,

“In science there is only physics; all the rest is stamp collecting.”
— Ernest Rutherford, As quoted in Rutherford at Manchester (1962) by J. B. Birks

After 1905, Rutherford turned his attention to the nature of alpha radiation. The deflection of alpha rays by electrical and magnetic fields demonstrated that the rays must consist of some kind of particles. Alpha rays are actually a stream of alpha particles traveling at very high rates of speed. Rutherford showed that an alpha particle is identical to a helium atom without its electrons, that is, a helium nucleus. Starting in 1909 Rutherford started experimenting with a gold foil that was bombarded wit beam of alpha particles. This was performed by Hans Geiger and Ernest Marsden under the direction of Ernest Rutherford at the Physical Laboratories of the University of Manchester.[11]

However, the achieved results surprised Rutherford. Although many of the alpha particles did pass through the gold foil as expected, many others were deflected at small angles while others were reflected back to the alpha source. They observed that a very small percentage of particles were deflected through angles much larger than 90 degrees. This meant that the atom had a concentrated center of positive charge and of relatively large mass. The alpha particles had either hit the positive center directly or passed by it close enough to be affected by its positive charge. Since many other particles passed through the gold foil, the positive center would have to be a relatively small size compared to the rest of the atom – meaning that the atom is mostly open space. This led to a new interpretation of the nature of the atomic world.

Rutherford’s new description of the atom set the foundation for all future atomic models and the development of nuclear physics. Rutherford’s model was later elaborated into the Bohr model by physicist Niels Bohr in 1913.[8] The Bohr model, in turn, was soon replaced by the Schrödinger model of the atom, as the basic atomic model used today. Rutherford’s theory of neutrons was proved in 1932 by his associate James Chadwick, who recognized neutrons immediately when they were produced by other scientists and later himself, in bombarding beryllium with alpha particles.[7] In 1935, Chadwick was awarded the Nobel Prize in Physics for this discovery.

In 1917, during World War I, Rutherford travelled to the USA with Henri Abraham and Charles Fabry to discuss the question of anti-submarine warfare. In 1919 he went to Cambridge as a professor, where he was director of the Cavendish Laboratory. In 1921 his paper Nuclear Constitution of Atoms was published. From 1925 to 1930 he was President of the Royal Society. In 1933, he assisted William Henry Beveridge in founding the Academic Assistance Council (AAC, now the Council for Assisting Refugee Academics), of which he became the first president. In 1934, together with Mark Oliphant and Paul Harteck, he succeeded in discovering tritium and in carrying out the first targeted nuclear fusion reaction. Rutherford is one of the world’s most honoured scientists. The British Crown ennobled him as a Knight Bachelor in 1914, admitted him to the Order of Merit in 1925 and raised him to hereditary peerage in 1931 as Baron Rutherford of Nelson, of Cambridge in the County of Cambridge.

For some time before his death, Rutherford had a small hernia, which he had neglected to have fixed, and it became strangulated, causing him to be violently ill. Despite an emergency operation in London, he died four days afterwards of what physicians termed “intestinal paralysis”, at Cambridge on 19 October 1937at age 66.

Dr. David Jenkins, Rutherford and the Birth of Nuclear Physics, [6]