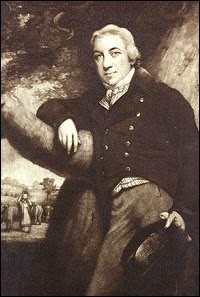 On May 17, 1749, English physician and scientist Edward Anthony Jenner was born, who was the pioneer of smallpox vaccine. He is often referred to as “the father of immunology“.

“The highest powers in our nature are our sense of moral excellence, the principle of reason and reflection, benevolence to our creatures and our love of the Divine Being.”
– Edward Jenner in The Life of Edward Jenner M.D. Vol. 2 (1838) by John Baron, p. 447

Edward Jenner was lucky to receive a good education and decided to go into the field of medicine quite early. Already at the age of 14, he was apprenticed to a surgeon and later also studied anatomy at a local hospital, where he gained most of the experience needed to become a surgeon himself. In 1770, Jenner became apprenticed in surgery and anatomy under surgeon John Hunter and others at St George’s Hospital. He was introduced to the Royal Society where he was later elected at as a fellow and became a family doctor near his original hometown in 1873. Jenner and his befriended colleagues formed a group, reading and discussing medical publications, while Jenner’s own interests in cowpox, angina pectoris, and cardiac valvular disease dominated.

Edward Jenner was elected fellow of the Royal Society in 1788, following his publication of a careful study of the previously misunderstood life of the nested cuckoo, a study that combined observation, experiment, and dissection. He described how the newly hatched cuckoo pushed its host’s eggs and fledgling chicks out of the nest (contrary to existing belief that the adult cuckoo did it). Having observed this behavior, Jenner demonstrated an anatomical adaptation for it – the baby cuckoo has a depression in its back, not present after 12 days of life, that enables it to cup eggs and other chicks.

In the field of angina pectoris, Edward Jenner was able to make significant contributions in concerns of understanding the illness and thinking new curing ideas. His interest in smallpox also increased. Jenner himself was inoculated for smallpox as a child. Vaccination with intact smallpox viruses (variolation) was previously practiced in Turkey and brought to Europe by Mary Wortley Montagu, the wife of the English ambassador in Turkey. Even though it was often helpful, the risks were too high and after Jenner’s method spread, variolation got banned. In Europe variolation was practiced by Jan Ingenhousz, for example. However, it was a risky prevention measure. From 1770, various people in England and Germany, including Benjamin Jesty (1774) and Peter Plett (1791), were already vaccinated with Cowpox lymph. Jenner later stated, he suffered from his treatment for all of his life. Smallpox was a serious illness, Voltaire mentioned in his works on inoculation that about 60% of the population suffered from the disease and of those almost 20% passed away.[6]

Already in the 1760’s, Dr John Foster published his ideas that cow pox could help preventing smallpox, but did no further known research on the topic. Then across Europe, several scientists began testing cowpox and Benjamin Jesty successfully used cowpox on his family but the procedure was not well known and understood. Jenner however, came to notice, that milkmaids were immune to smallpox but received blisters from cowpox. He found out, that the pus in these blisters was the significant matter, protecting them from smallpox.

In May 1796, Jenner inoculated James Phipps, the little son of his gardener with the pus he took from a milkmaid’s arm blisters. Even though the boy ran into a fever, he showed no signs of infection. After being exposed to smallpox, no disease followed. Jenner then managed to prove that the persons he inoculated with cowpox were immune to smallpox.

Edward Jenner’s findings had a rough start and the Royal Society not immediately published them. Jenner undertook further experiments – also with his 11-month-old son. In 1798 he published his results and had to experience that they tried to make him look ridiculous. Opponents of vaccination called his method “rejuvenation” of blood. Nevertheless, the method he advocated prevailed. Jenner called his method “vaccination“. This term still stands in English today for the vaccination of a healthy person with weakened or inactivated pathogens or their immunogenic components. Jenner’s vaccination was able to suppress the widespread epidemic and is the only infectious disease to date.

In the 1840’s, the British government provided vaccination with cowpox free of charge and the procedure spread across Europe. After the great success, Jenner was awarded quite a great amount of money by the government to continue his research on the field, which disabled him to keep working as a regular doctor. In 1803 in London, he became president of the Jennerian Society, concerned with promoting vaccination to eradicate smallpox. The Jennerian ceased operations in 1809. Returning to London in 1811, Jenner observed a significant number of cases of smallpox after vaccination. He found that in these cases the severity of the illness was notably diminished by previous vaccination.

Jenner was found in a state of apoplexy on 25 January 1823, with his right side paralyzed. He never fully recovered and eventually died of an apparent stroke, his second, on 26 January 1823, aged 73.