You are here: Home › art › Edvard Munch and the Munch Affair 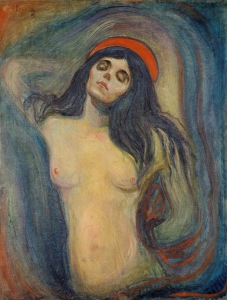 On November 5, 1892, Norwegian painter and printmaker Edvard Munch evoked bitter controversy with his exhibition on behalf of the Union of Berlin Artists. Even though the exhibition was closed after only one week, the scandal made Munch highly famous. The event became later known as the ‘Munch Affair’.

Edvard Munch was born on December 12, 1863 and grew up in Oslo. His family often faced hard times due to the fatal illnesses of his mother and sister. Also his brother Andreas died shortly after his marriage. These sad events are known to have highly affected Munch’s art in later years. He attended a technical school before dedicating his life to art. Due to his efforts, Munch was soon introduced to Norway‘s leading artist, Christian Krohg, whose works were influenced by Realism. The first success Munch’s came with the painting ‘The Sick Child‘ which presumably deals with his sister’s early death. A few years later, he painted a portrait of the leader of the Christiania bohemians Hans Jæger, who is known to have influenced Munch in this period. Munch began an extensive biographical literary production which he resumed at different periods in his life. These writings serve as a reference for several of the central motifs of the nineties. Munch was awarded a state travel grant for three years and went to Paris. Unfortunately, he was informed that his father passed away shortly after getting settled in France. The artist then painted several dark pictures including ‘Night’. In this period, Munch did first sketches of the famous ‘The Scream‘, which is often described at the first expressionistic picture. [1,3]

Edvard Munch got the chance to present his art in France and was also invited to show his masterpieces to the Artist’s Association of Berlin. The event became widely known as a “succès de scandale” or better the Munch Affair. The press understood Munch‘s work as “pictures of an Ibsenesque mood arousing curiosity both on a social and psychological level“. It is assumed that these different opinions on Munch’s art origin from the polarized artistic life that Berlin and Paris had after the war between Germany and France of 1870/71. While Paris was known to be quite open to new impulses, Berlin was probably more striving for educational national art. The exhibition of Edvard Munch was opened with 55 works on November 5th, 1892at the “Architektenhaus”. Unfortunately, the conservative painter Anton von Werner, Director of the Imperial Academy of Fine Arts claimed that the exhibition should be closed to the general public because Munch’s masterpieces were degenerate art. The exhibition lasted for only seven days in total. However, throughout Germany, the people wanted to see an international scandal. The event made Munch famous over night. Also, the Berlin Secession was founded in Berlin, an association of progressive artists, with Max Liebermann as its first President. Munch’s scandal exhibition then toured Düsseldorf, Cologne, and reopened in Berlinin December the same year. Even though the artist did not sell anything, Munch earned an income from the ticket sales. The artist was well integrated in the Berlin circle of artists and intellectuals and stayed in the city for a few years. [2]

Almost 20 years after Munch’s death in 1944, the Munch Museum at Tøyen was opened, which hosts about 1100 paintings as well as a few thousand drawings and prints. Munch‘s art was known to be quite personalized. His symbolism was personal, but his influence spread especially throughout the German expressionism. Munch was also the first known Western artist to have his pictures exhibited at the National Gallery in Beijing. In 1994, one version of The Scream was stolen, and another in 2004. The works were recovered but were severely damaged. The Scream was sold for $119.9 million in 2012. [1,3]

At yovisto, you may be interested in a video lecture on German Expressionism by Cornelia Fey at San Diego.