You are here: Home › geology › Daniel Barringer and the Barringer Crater 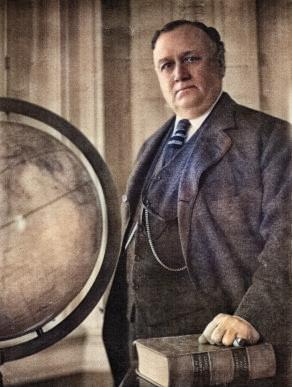 On May 25, 1860, American geologist Daniel Moreau Barringer was born. Barringer is best known as the first person to prove the existence of an impact crater on the Earth, the Meteor Crater in Arizona. The site has been renamed the Barringer Crater in his honor, although this name is mainly used in the scientific community.

Daniel Barringer was born in Raleigh, North Carolina, USA, the son of Daniel Moreau Barringer, a nephew of Confederate General Rufus Barringer . After graduating from Princeton University in 1879 at the age of 19, Daniel Barringer went on to become president of his class at the University of Pennsylvania Law School, from which he graduated in 1882, receiving his A.M. from Princeton in the same year. But the practice of law bored him. His real interests were in the outdoor life and in big game hunting in the West, where Theodore Roosevelt and the author Owen Wister were his hunting companions. In search of an occupation that would allow him to pursue these interests, he turned to mining, and by 1902 had made himself a considerable fortune.[1]

A Crater in Flagstaff, Arizona

In 1902, he learned of the existence of a large crater, located 35 miles east of Flagstaff, Arizona, and the meteoritic iron around it. The crater, known as Coon Mountain, had previously been studied by the geologist Grove Karl Gilbert, chief geologist for the U.S. Geological Survey, in 1891. Gilbert had hypothesized that the crater must have been the result of either a gas explosion or a meteorite. Gilbert however came to the conclusion that the crater must be the result of an explosion, even though there was apparently a clear presence of thousands of small meteoritic particles in the vicinity of the crater. 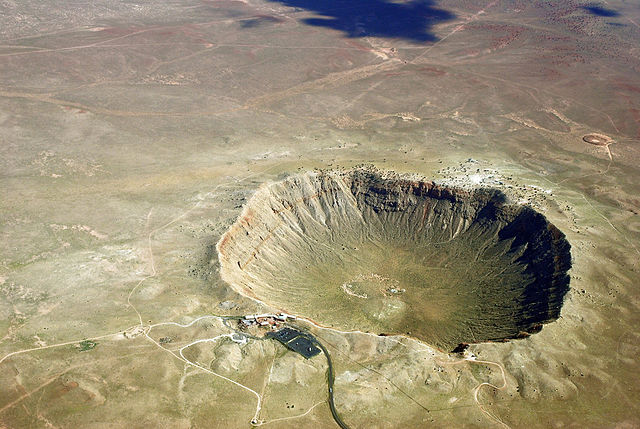 Arizona Meteor Crater lies at an elevation of about 1,740 m above sea level. It is about 1,200 m in diameter, some 170 m deep, and is surrounded by a rim that rises 45 m above the surrounding plains. The center of the crater is filled with 210–240 m of rubble lying above crater bedrock. The crater was created about 50,000 years ago during the Pleistocene epoch, when the local climate on the Colorado Plateau was much cooler and damper. The area was an open grassland dotted with woodlands inhabited by woolly mammoths and giant ground sloths. The object that excavated the crater was a nickel-iron meteorite about 50 meters across. The crater came to the attention of scientists following its discovery by American settlers in the 19th century. Dubbed the Canyon Diablo crater – from Canyon Diablo, Arizona, the closest community to the crater in the late 19th century, 19 km north-west of the crater but now a ghost town – it had initially been ascribed to the actions of a volcano. This was not an unreasonable assumption, as the San Francisco volcanic field lies only about 64 km to the west.

After hearing of the existence of the crater and the meteoritic iron, Barringer became convinced that the crater was of meteoritic origin. He created the “Standard Iron Company” in order to mine the crater for the iron that he assumed must be buried below its surface. Without ever having seen the crater, he enlisted his friend, Philadelphia mathematician and physicist Benjamin Chew Tilghman, in the formation of the Standard Iron Company, and began securing mining patents for the crater and the land around it. The company conducted drilling operations in and around the crater between 1903 and 1905, and concluded that the crater had indeed been caused by a violent impact. It was unable to find the meteorite, however.

In 1906, Barringer and his partner Benjamin C. Tilghman, presented their first papers to the U.S. Geological Survey outlining the evidence in support of the impact theory. The papers were published in the Proceedings of the Academy of Natural Sciences in Philadelphia. Daniel Barringer believed that the enormous meteorite must be there, still and spent over $600,000 in mining the crater, nearly bankrupting him. In 1928, Astronomer Forest Ray Moulton performed calculations on the energy expended by the meteorite on impact, and concluded that the meteorite, although it must have had a mass of probably 300.000 tons at impact, had most likely vaporized when it landed. On November 23, 1929, Moulton’s second and more thorough analysis arrived; it buttressed the author’s original conclusions with 127 pages of reasoning and mathematical analysis. By November 30, Barringer was dead of a massive heart attack.[1]

It was not until 57 years after Barringer and Tilghman presented their first papers that the impact theory was fully accepted by the scientific community.