You are here: Home › chemistry › Cyril Ponnamperuma and the Origins of Life 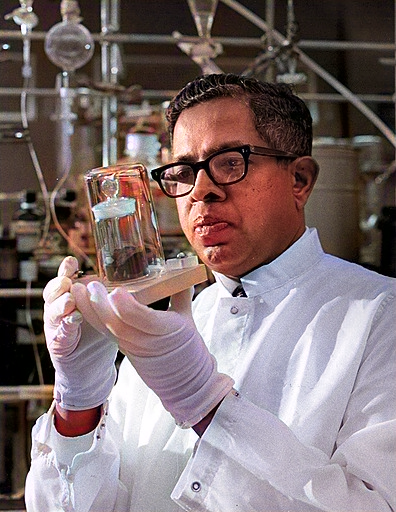 Cyril Andrew Ponnamperuma was born in Galle, Ceylon, now Sri Lanka. He attended St. Aloysius’ College, Galle and later St. Joseph’s College, Colombo. He continued his education at University of Madras, India and earned his Bachelor of Arts in philosophy in 1948. Ponnamperuma then moved to the United Kingdom and joined Birkbeck, University of London to study chemistry. There he finished his Bachelor of Science degree in chemistry in 1959. At the same time he had the opportunity to work with Professor J. D. Bernal, a pioneering scientist engaged in research on the origin of life. Ponnamperuma moved to the United States where he received his doctorate in chemistry from the University of California, Berkeley, in 1962 under Melvin Calvin, a Nobel laureate whose laboratory was doing research on synthesis of the basic building blocks of life.[3]

Chemical Evolution and the Origins of Life

During his scientific career, Cyril Ponnamperuma authored more than 400 articles on chemical evolution and the origins of life. He then went to work at the Ames Research Center. At Ames, he studied the wide variety of amino acids, the building blocks of proteins, found in a certain class of meteorites that fell on Earth in the planet’s early history. Other research was inspired by an experiment carried out in the 1950’s by Harold Urey and Stanley L. Miller, who synthesized amino acids by firing electric sparks in a solution of their components, mimicking the assumed conditions of the early earth.[4]

Next to contributing to the field of abiogenesis, Ponnamperuma joined NASA’s Exobiology Division and took over the Chemical Evolution Division. He was appointed principal investigator for analysis of lunar soil brought to earth by Project Apollo. Ponnamperuma was further involved with NASA in the Viking and Voyager programmes. He was offered membership in the Space Science Advisory Council and Life Sciences Advisory Council of NASA. He tried to learn how the basic building blocks of life could have been synthesized outside a living cell. He had “no doubt at all,” he said, that life could some day be created in the laboratory. However, he declined to predict how soon life could be synthesized.[1]

Cyril Ponnamperuma became the first director of the Arthur C. Clarke Centre for Modern Technologies in Sri Lanka and he was appointed science advisor to the President of Sri Lanka by the late President J. R. Jayewardene. In 1967, the Atomic Energy Commission of India offered him an assignment as a visiting Professor and further, UNESCO appointed him as its Director of the Programme for the development of basic research in Sri Lanka. During his later career, Ponnamperuma joined University of Maryland where he became Professor of Chemistry as well as the Director of the laboratory of chemical evolution. In 1991 France made him a Chevalier des Arts et des Lettres for his international efforts.

Cyril Ponnamperuma died soon after suffering a heart attack at the Laboratory of Chemical Evolution, University of Maryland USA, on December 20, 1994, at age 71.