You are here: Home › architecture › Christopher Wren and his Masterpiece – Saint Paul’s Cathedral 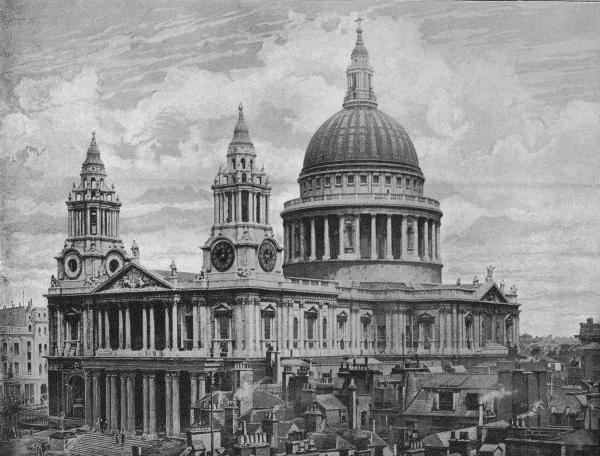 On October 20, 1708, the construction of Sir Christopher Wren‘s famous Saint Paul’s Cathedral was finished when the final stone was placed on its lantern. The Cathedral is dedicated to Paul the Apostle and depicts the fifth of its kind standing in London since 604 AD.

“Architecture has its political Use; public Buildings being the Ornament of a Country; it establishes a Nation, draws People and Commerce; makes the People love their native Country, which Passion is the Original of all great Actions in a Common-wealth…. Architecture aims at Eternity.”
– “Of Architecture”, Parentalia; or Memoirs of the Family of the Wrens, comp. by his son Christopher

The Old St. Paul’s Cathedral is considered the fourth St. Paul’s. Construction work on the cathedral began after a 1087 fire and finshed in 1314. Another fire in 1136 interrupted the work on it. During the time it was constructed, the cathedral’s architecture changed from Romanesque to Gothic. During the 16th century, the cathedral began to decay and during the early 17th century, a west front was added to the cathedral. In 1666, the Great Fire of London,[7] the Old St. Paul’s burned down. While it is believed that the building could have been reconstructed, it was decided to create a new, modern cathedral.

After the destruction of the old Saint Paul’s Cathedral in 1666 during the Great Fire of London, Christopher Wren was assigned the task to design a replacement structure three years later. Wren was an experienced architect as well as a passionate scientists known for his major contributions to the fields of astronomy and physics. Prior to the Great Fire, Wren had already begun working on the old Cathedral. He started designing additional interiors and already planned the construction of a dome in order to replace the old spire. For the cathedral, he originally planned a large central building on the ground plan of a Greek cross with dome, which was rejected as too radical and expensive, as well as the following revisions of his design.

Only a design by Wren from 1675 was accepted. Wren planned a long building with a central crossing over which he planned a high tower. According to this plan, construction began, but due to numerous changes, only the ground plan dimensions remained of the original plan. Instead of the crossing tower, Wren was able to impose his ideas of the dome from the first drafts. The west portico (the main entrance to the cathedral) was planned only after 1703 and crowned with two clock towers until the completion of the cathedral in 1708. 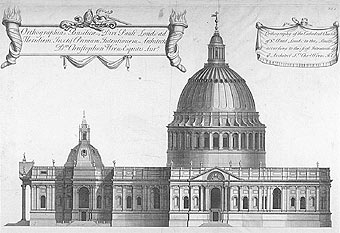 The construction of Saint Paul’s Cathedral was not easy, due to the clay soil which was difficult to work with. Wren had to make several changes in the overall design in order to guarantee the Cathedral’s solidity. During the construction, many well known English artists and craftsmen were to decorate the Cathedral including Sir James Thornhill. His work on the dome of the cathedral was to be his master piece he is now best known for and depicts eight scenes from the Life of Saint Paul executed in grisaille.

Saint Paul’s Cathedral is often the scene of important state ceremonies and public events; from the funerals of Lord Nelson, Baroness Thatcher and of Sir Winston Churchill to the celebration of Queen Elizabeth II‘s Golden Jubilee in 2002. In 1981, Lady Diana Spencer and Prince Charles were married in the cathedral. In the crypt of the cathedral, numerous famous Britons have been buried or immortalized by a monument. It is one of London‘s most visited sights and brings visitors from all over the world to amazement due to its glory and its extraordinary architecture.

At yovisto academic video search you can enjoy the lecture by Martin Stancliffe, surveyor to the fabric of St Paul’s Cathedral due to its 300th anniversary.