You are here: Home › literature › Charles Percy Snow and the Two Cultures 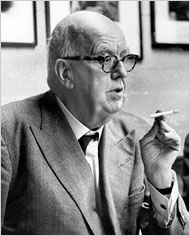 On October 15, 1905, English physical chemist and novelist Charles Percy Snow, Baron Snow was born. Snow is best known for his series of novels known collectively as Strangers and Brothers, and for The Two Cultures, a 1959 lecture in which he laments the gulf between scientists and “literary intellectuals“.

C. P. Snow was born in Leicester to William Snow, a church organist and choirmaster, and his wife Ada. His father, a fellow of the Royal College of Organists, secured a precarious lower-middle-class existence by giving music lessons and clerking in a shoe factory. C. P. Snow was educated at Alderman Newton’s School, and at Leicestershire and Rutland College, now the University of Leicester, where he took first-class honors in chemistry (1927) and an M.Sc. in physics (1928). From Leicester, Snow gained a scholarship to Christ’s College, Cambridge, and was awarded his PhD in physics (Spectroscopy). In 1930 he became a Fellow of Christ’s College.

Snow remained as a fellow until 1950. After 1935, with his career as research physicist over and that of novelist conclusively under way, his college duties consisted of tutoring, administration, and service to the university’s press as editor of the Cambridge Library of Modern Science and, from 1937 until 1940, the popular science magazine Discovery. During World War II, Snow was a member of the Royal Society Advisory Subcommittee on Deployment of Scientific Resources (1939–1942), becoming, upon absorption of this committee by the Ministry of Labour, the ministry’s director of technical personnel. His service, which included training scientists for radar work and helping to cull the British contingent for the Manhattan Project, earned him the rank of C.B.E. (1943) and paved the way to his postwar career as a scientific adviser to the government.[2] In 1944 he was appointed director of scientific personnel for the English Electric Company. Later he became physicist-director.

As a politician Snow was parliamentary secretary in the House of Lords to the Minister of Technology from 1964 to 1966 in the Labour government of Harold Wilson. In the 1957 New Year Honours he was knighted, having the honour conferred by Queen Elizabeth II on 12 February, and was created a life peer, as Baron Snow, of the City of Leicester, on 29 October 1964.

Snow’s friends included the mathematician G. H. Hardy,[7] for whom he would write a biographical foreword in A Mathematician’s Apology, the physicist P. M. S. Blackett, the X-ray crystallographer J. D. Bernal, and the cultural historian Jacques Barzun. At Christ’s College he tutored H. S. Hoff – later better known as the novelist William Cooper. The two became friends, worked together in the civil service and wrote versions of each other into their novels: Snow was the model for the college dean, Robert, in Cooper’s Scenes from Provincial Life.

Snow wrote (and destroyed) his first novel at twenty, while he was still a chemistry student in Leicester.[2] His first published novel was a whodunit, Death under Sail (1932). In 1975 he wrote a biography of Anthony Trollope. But he is better known as the author of a sequence of novels entitled Strangers and Brothers in which he depicts intellectuals in academic and government settings in the modern era. The best-known of the sequence is The Masters. It deals with the internal politics of a Cambridge college as it prepares to elect a new master. Having all the appeal of an insider’s view, the novel depicts concerns other than the strictly academic that influence the decisions of supposedly objective scholars. The Masters and The New Men were jointly awarded the James Tait Black Memorial Prize in 1954. In 1974, Snow’s novel In Their Wisdom was shortlisted for the Booker Prize. In The Realists, an examination of the work of eight novelists – Stendhal, Honoré de Balzac, Charles Dickens, Fyodor Dostoevsky, Leo Tolstoy, Benito Pérez Galdós, Henry James and Marcel Proust – Snow makes a robust defence of the realistic novel.

It was not as a novelist, however, but as a besieged publicist for the increasing importance of science in human life and as a pundit concerned with global problems of poverty, nuclear weapons, and the menacing collapse of Western civilization, that Snow became a major public figure with an international reputation.[2] On 7 May 1959, Snow delivered a Rede Lecture called The Two Cultures, which provoked widespread and heated debate. Subsequently published as The Two Cultures and the Scientific Revolution, the lecture argued that the breakdown of communication between the “two cultures” of modern society – the sciences and the humanities – was a major hindrance to solving the world’s problems. In particular, Snow argues that the quality of education in the world is on the decline. Snow’s Godkin Lectures at Harvard in 1960, published under the title Science and Government (1961), used the clashes between Henry Tizard and Churchill’s science adviser F. A. Lindemann during World War II over the viability of radar and strategic bombing to bring to the public’s attention “the great underground domain of science and government.” His purpose was to warn against the overinvestiture of power in science advisers, who function in a closed world of committee politics free from the checks and balances that might otherwise be provided by the scientific community.[2]

Snow’s many honors included fellowship in the Royal Society of Literature (1951), honorary membership in the American Academy of Arts and Sciences (1962), and an appointment as extraordinary fellow of Churchill College, Cambridge (1966). C. P. Snow died on July 1, 1980, in London.