You are here: Home › anthropology › Bronisław Malinowski – the Founder of Social Anthropology 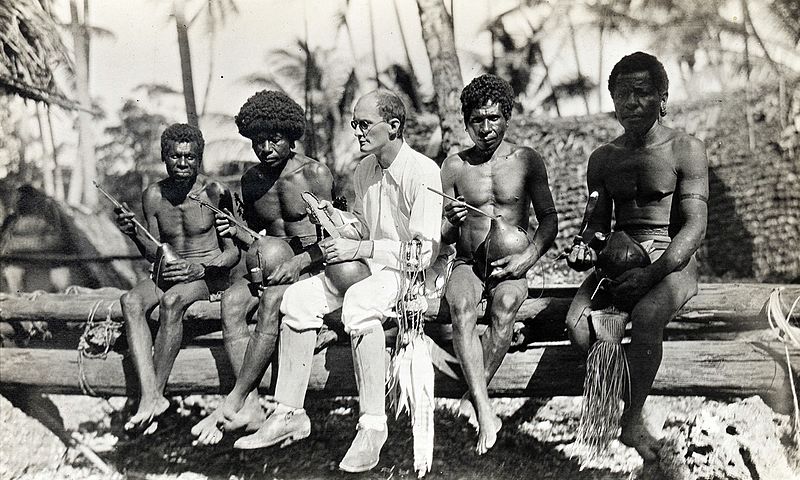 On April 7, 1884, Polish anthropologist Bronisław Kasper Malinowski was born. Malinowski is widely recognized as the founder of social anthropology and often considered one of the most important 20th-century anthropologists.

Bronisław Malinowski was the son of the Krakow linguist Lucjan Malinowski. When he was thirteen years old, his father died. In his youth he received strong influences from Ernst Mach,[6] a philosopher oriented towards natural science, and from linguistics. Malinowski earned his doctorate in philosophy from Kraków’s Jagiellonian University in 1908. Malinowski began reading James Frazer’s The Golden Bough which inspired him to focus his research towards ethnology. Malinowski attended the University of Leipzig and studied under economist Karl Bücher and psychologist Wilhelm Wundt.[4] Malinowski began studying at the London School of Economics under C. G. Seligman [5] and Edvard Westermarck in 1910.

Malinowski is regarded as the “father of field research”, as it has now become the core of the empirical work of anthropology. He propagated field research stays with close contact to the informants over a long period of time. For him, field research meant participating observation: over a longer period of time, the researcher shared the everyday life of the people he researched and observed them. Malinowski’s best-known long participatory observation was promoted by chance: in 1914, when the First World War broke out, he set off for the Trobriand Islands, Papua in the South Seas. Malinowski had a passport from the imperial-royal dual monarchy Austria-Hungary and was interned by the British colonial power as an enemy of the war – but exactly where he wanted to conduct his field research anyway. He only had to report to a British colonial officer from time to time and could otherwise pursue his research unchallenged, which lasted a total of three and a half years.

There, Malinowski conducted fieldwork at Mailu Island and in the Trobriand Islands. The ethnographic collection he made on the Trobriand Islands is now held by the British Museum. During Malinowski’s famous trip, World War I started and he was not allowed to return to Europe from the British-controlled region because, though Polish by ethnicity, he was a subject of Austria-Hungary. Australian authorities gave him the opportunity of conducting research in Melanesia. It was during this period that he conducted his fieldwork on the Kula ring and advanced the practice of participant observation, which remains the hallmark of ethnographic research today.

Argonauts of the Western Ring

Bronisław Malinowski published scientific works on the Kula Ring, most famously Argonauts of the Western Pacific, 1922. The Kula Ring is a ceremonial exchange system conducted in the Milne Bay Province of Papua New Guinea. Malinowski traced the network of exchanges of bracelets and necklaces across the Trobriand Islands, and established that they were part of a system of exchange, and that this exchange system was clearly linked to political authority. Malinowski’s study became the subject of debate with the French anthropologist, Marcel Mauss, author of The Gift. Since then, the Kula ring has been central to the continuing anthropological debate on the nature of gift giving, and the existence of gift economies. Malinowski’s work in the field of social anthropology was highly successful and increased his reputation as one of the best-known anthropologists in the world.

The Sexual Life of the Wild

In his second important work on the Trobriander, the 1929 book on “The Sexual Life of the Wild in Northwest Melanesia,” Malinowski describes in detail the social organization of sexuality, including social rites, choice of partner, and sexual behavior of the Trobriander. He was impressed by the fact that sexuality is not suppressed – as in Central Europe – but was part of people’s everyday life. For example, the young people had so-called youth centres at their disposal where they could try out their sexuality in a playful way. This was promoted by the entire community and regarded as an important step towards adulthood. He compares his observations with Sigmund Freud’s ideas on the development of sexuality.

At the London School of Economics

From 1922 to 1938 he himself taught at the London School of Economics. His most important students were Audrey Richards, Edward E. Evans-Pritchard, Talcott Parsons, Sir Raymond Firth, Phyllis Kaberry, Isaac Schapera, Hilda Kuper and Monica Wilson. Jomo Kenyatta wrote his master’s thesis with him, which was published in 1938 under the title Facing Mount Kenya with a preface by Malinowski. He began establishing the London School of Economics as Europe’s main center of anthropology. During the start of World War II, Bronisław Malinowski intermittently taught in the United States and he decided to stay there. Malinowski took up a position at Yale University, where he remained until his death. In 1942 he co-founded the Polish Institute of Arts and Sciences of America.

Malinowski made a clear distinction between social anthropology and history. In his opinion, a cultural phenomenon in the present should not be explained by history, but should be explainable for the culture in question on the basis of its current function. He also dealt with the then very popular psychoanalysis around Sigmund Freud.[7] Like Margaret Mead after him, he referred to the intercultural differences between sexual and other important social relationships (parent-child relationships, etc.) and warned against projecting Freud’s findings onto non-European cultures.[8] Malinowski was a very extroverted person and loved the hype about his person. His work Argonauts of the Western Pacific became a bestseller far beyond the boundaries of ethnological circles. Malinowski died on 16 May 1942, aged 58, of a heart attack while preparing to conduct summer fieldwork in Oaxaca, Mexico.