You are here: Home › mathematics › Aryabhata and Early Indian Mathematics 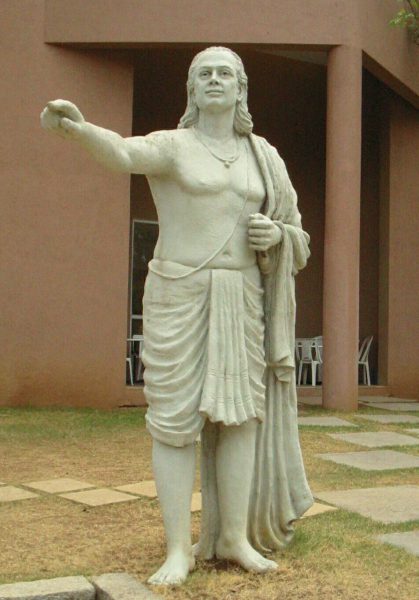 In 476 CE, Indian mathematician and astronomer Aryabhata was born. Aryabhata is the earliest Indian mathematician whose work and history are available to modern scholars. In his work “Ganita” Aryabhata names the first 10 decimal places and gives algorithms for obtaining square and cubic roots, using the decimal number system. He also came up with an approximation of pi and the area of a triangle.

“Aryabhata is the master who, after reaching the furthest shores and plumbing the inmost depths of the sea of ultimate knowledge of mathematics, kinematics and spherics, handed over the three sciences to the learned world.” Bhāskara (c. 600 – c. 680), Indian mathematician

Aryabhata mentions in the Aryabhatiya that it was composed 3,600 years into the Kali Yuga, when he was 23 years old. This corresponds to 499 CE, and implies that he was born in 476. Aryabhata called himself a native of Kusumapura or Pataliputra, adjacent to modern-day Patna, then the capital of the Gupta dynasty. It is fairly certain that, at some point, he went to Kusumapura for advanced studies and lived there for some time. Kusumapura became one of the two major mathematical centres of India, the other being Ujjain. Both are in the north but Kusumapura is on the Ganges and is the more northerly. Pataliputra, being the capital of the Gupta empire at the time of Aryabhata, was the centre of a communications network which allowed learning from other parts of the world to reach it easily, and also allowed the mathematical and astronomical advances made by Aryabhata and his school to reach across India and also eventually into the Islamic world.[2]

A Compendium on Mathematics and Astronomy

Aryabhata is the author of several treatises on mathematics and astronomy, most famously Aryabhatiya (c. 499) and the now lost Aryabhatasiddhanta. His major work, Aryabhatiya, a compendium of mathematics and astronomy, was extensively referred to in the Indian mathematical literature and has survived to modern times. The mathematical part of the Aryabhatiya covers arithmetic, algebra, plane trigonometry, and spherical trigonometry. It also contains continued fractions, quadratic equations, sums-of-power series, and a table of sines. Aryabhatiya was particularly popular in South India, where numerous mathematicians over the ensuing millennium wrote commentaries. The work was written in verse couplets. Following an introduction that contains astronomical tables and Aryabhata’s system of phonemic number notation in which numbers are represented by a consonant-vowel monosyllable, the work is divided into three sections: Ganita (“Mathematics”), Kala-kriya (“Time Calculations”), and Gola (“Sphere”).[1]

In Ganita Aryabhata names the first 10 decimal places and gives algorithms for obtaining square and cubic roots, using the decimal number system. Then he treats geometric measurements — employing 62,832/20,000 (= 3.1416) for π — and develops properties of similar right-angled triangles and of two intersecting circles.[1] Other rules given by Aryabhata include that for summing the first n integers, the squares of these integers and also their cubes. Aryabhata gives formulae for the areas of a triangle and of a circle which are correct, but the formulae for the volumes of a sphere and of a pyramid are claimed to be wrong by most historians.[2] As we have seen, Aryabhata determined the circle number Pi very precisely to 3.1416 by the standards of the time and seems to have already guessed that it is an irrational number. He was able to draw square roots and cubic roots as well as solve various linear and quadratic equations; he also developed trigonometry further. Even his sine tables are written in verse in the old Indian tradition. His greatest mathematical achievement, however, is the “indefinite analytics” for generalized Diophantine equations. Imparted by Muslim mathematicians, his mathematical knowledge also indirectly reached later medieval Europe.

With Kala-kriya Aryabhata turned to astronomy — in particular, treating planetary motion along the ecliptic. The topics include definitions of various units of time, eccentric and epicyclic models of planetary motion, as well as planetary longitude corrections for different terrestrial locations. Aryabhatiya ends with spherical astronomy in Gola, where he applied plane trigonometry to spherical geometry by projecting points and lines on the surface of a sphere onto appropriate planes.[1] Solar and lunar eclipses were scientifically explained by Aryabhata. He states that the Moon and planets shine by reflected sunlight. Instead of the prevailing cosmogony in which eclipses were caused by two demons Rahu and Ketu. He explains eclipses in terms of shadows cast by and falling on Earth. Thus, the lunar eclipse occurs when the moon enters into the Earth’s shadow. He discusses at length the size and extent of the Earth’s shadow and then provides the computation and the size of the eclipsed part during an eclipse. The great importance that Aryabhata attached to the Great Conjunctions was taken up again by the Islamic astronomer Albumasar (787-866).[6,7] He influenced rabbinical astrologers such as Isaac Abrabanel and Kepler‘s conjecture that the Star of Bethlehem was a triple conjunction of Jupiter and Saturn.[8]

Aryabhata’s work was of great influence in the Indian astronomical tradition and influenced several neighbouring cultures through translations. The Arabic translation during the Islamic Golden Age (c. 820 CE), was particularly influential. Some of his results are cited by Al-Khwarizmi and in the 10th century Al-Biruni stated that Aryabhata’s followers believed that the Earth rotated on its axis.

India’s first satellite Aryabhata launched in 1975 and the lunar crater Aryabhata are named in his honour.