You are here: Home › astronomy › Aristarchus of Samos – Putting the Sun at the Right Place

Aristarchus’s 3rd-century BC calculations on the relative sizes of the Sun, Earth and Moon

About 310 BC, ancient Greek astronomer and mathematician Aristarchus of Samos was born. He presented the first known model that placed the Sun at the center of the known universe with the Earth revolving around it. As Anaxagoras before him, he also suspected that the stars were just other bodies like the Sun. His astronomical ideas were often rejected in favor of the geocentric theories of Aristotle and Ptolemy.

Apparently, Aristarchus of Samos was a student of the peripatetic philosopher Strato of Lampsacus, who was head of Aristotle’s Lyceum. It is not clear however, that Aristarchus studied with Strato in Athens but rather that he studied with him in Alexandria. Aristarchus is mostly mentioned by Vitruvius, who was famous as a Roman architect and engineer, and the author of the important treatise ‘De architectura‘. In this work Vitruvius lists men who have been knowledgeable across all branches of science:

Men of this type are rare, men such as were, in past times, Aristarchus of Samos, Philolaus and Archytas of Tarentum, Apollonius of Perga, Eratosthenes of Cyrene, Archimedes and Scopinas of Syracuse, who left to posterity many mechanical and gnomonic appliances which they invented and explained on mathematical principles.

Vitruvius also explains that Aristarchus invented a “sundial in the shape of a hemispherical bowl with a pointer to cast shadows placed in the middle of the bowl“. However, there are no clear evidences concerning the origin of Aristarchus’s belief in a heliocentric system. The Greeks had not accepted the hypothesis and therefore, it never gained enough popularity. Apparently, historians only found out about Aristarchus’s believes through Archimedes. As Archimedes reported Aristarchus’ views, he also criticized them as “mathematically meaningless proportions“.[1] During the 4th century BC, Plato and Aristotle defended the geocentric model but both philosophers did so using mostly mystical and mythical arguments. The stars and planets were carried around the Earth on spheres, arranged in a concentric fashion. Plato even described the “universe as the Spindle of Necessity, attended by the Sirens and turned by the three Fates“. Plato explained that natural laws could not account for all the changes in the universe. Plutarch also wrote about Aristarchus, saying that he probably followed Heraclides of Pontus’  believes that the daily rotation of the fixed stars was a result of the rotation of the Earth on its axis. [2] 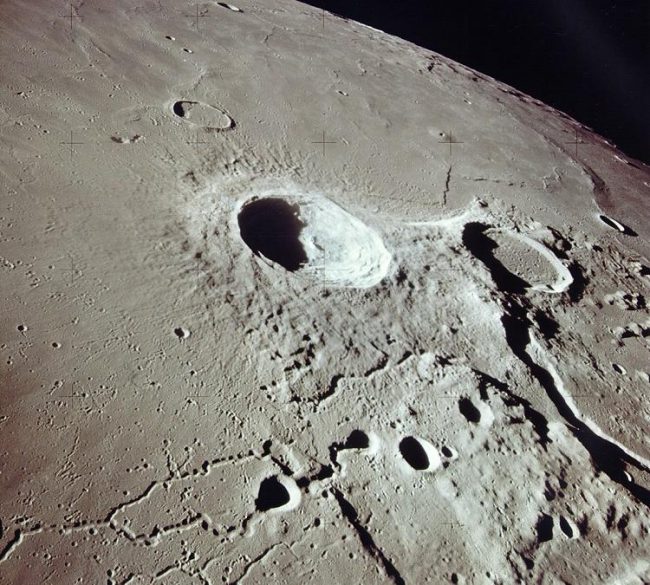 This is a view of the Aristarchus and Herodotus craters taken from orbit during the Apollo 15 mission. The view is toward the south. Aristarchus crater is near the center of the image, and the flooded Herodotus is to the right.

It is not clear if Aristarchus sticked with his believe of the heliocentric system after most astronomers had rejected the theory. Hipparchus of Nicea was one of the most respected Greek astronomers, who concluded that the geocentric model better explained the observations than did the model of Aristarchus. It was found that the only way that Aristarchus’ theory could stand mathematical analysis was by supposing an elliptical orbit of the Earth, an assumption that was not accepted in the community.[2]

Aristarchus also watched the moon moving through the Earth’s shadow during a lunar eclipse. He concluded that the diameter of the Aarth was 2.85 times that of the moon. In fact, this factor is about 3.67. Furthermore, Aristarchus recognized that the half moon is created by the fact that the sunlight falls exactly perpendicular to our direction of view of the moon. The triangle sun, moon, earth thus shows a right angle at half moon.

Only about 1800 years later was the heliocentric worldview of Nicolaus Copernicus [5] taken up again and comprehensively elaborated. Aristarchus is mentioned by Archimedes, but his work appeared in print only one year after Copernicus’ death; therefore it is unlikely that Copernicus knew the view of Aristarchus.

At yovisto academic video search you may learn more about ‘Voyages to the Outer Solar System‘ in a lecture by Ian Morrison.