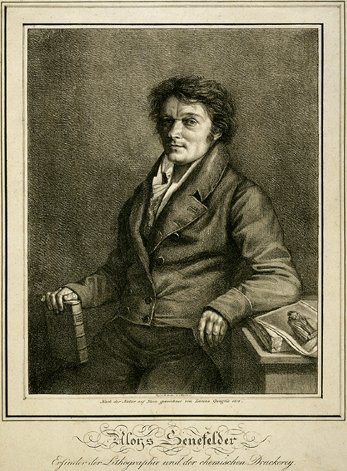 His father, Franz Peter Senefelder, an actor at the Royal Theatre of Munich, was playing at Prague, then Imperial city (Reichsstadt) of the Holy Roman Empire of the German Nation, at the time of the birth of his son. The young Senefelder studied at Munich and received a scholarship, which enabled him to study jurisprudence at Ingolstadt. The death of his father in 1791 forced him to cease his studies in order to help support his mother and a family of eight sisters and brothers. After attempting to become an actor, he took up dramatic writing, at which he was at first fairly successful with a play called ‘Connoisseur of Girls‘.

Alois Senefelder’s contribution to printing technology is considered to rank alongside William Ged’s invention of stereotyping, Friedrich Koenig‘s steam press and Ottmar Mergenthaler‘s linotype machine. Senefelder’s innovation made printing more affordable and available to more people, and became important in art and newspaper printing. Senefelder lived long enough to see his process become widely adopted both for art printmaking and as the dominant method of picture reproduction in the printing industry. On February 28, 1834, Alois Senefelder passed away aged 62 in Munich.

At yovisto academic video search you can learn more about modern lithographic printing technology in the lecture of Dr. Zangerle from Freiburg University (in German).