You are here: Home › philosophy › Alexis de Tocqueville and the Democracy in America 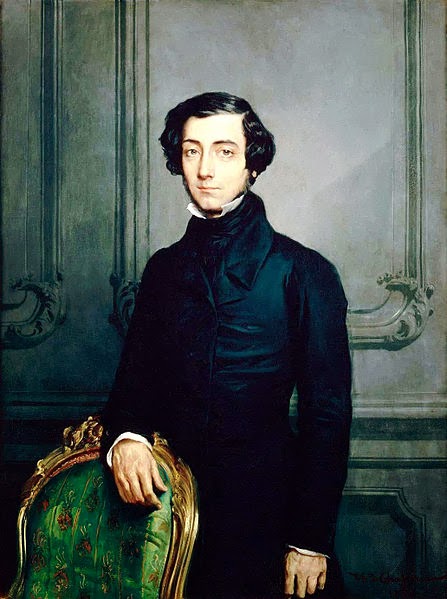 On July 29, 1805, French political thinker and historian Alexis de Tocqueville was born. He is best known for his Democracy in America, where he analyzed the rising living standards and social conditions of individuals and their relationship to the market and state in Western societies. Today, it is considered an early work of sociology and political science.

“The best laws cannot make a constitution work in spite of morals; morals can turn the worst laws to advantage. That is a commonplace truth, but one to which my studies are always bringing me back. It is the central point in my conception. I see it at the end of all my reflections”. – Alexis de Tocqueville (1830)

The Youth of Alexis de Tocqueville

De Tocqueville was born as the third son of Hervé Bonaventure Clérel de Tocqueville and Louise Le Peletier de Rosanbo (a granddaughter of the statesman Malesherbes). He spent his childhood in Verneuil-sur-Seine, where his noble father, like his mother, a royalist, became mayor. From the age of ten his father successively served in the prefectures of Angers, Beauvais, Dijon, Metz, Amiens and Versailles, so that de Tocqueville grew up mainly with his mother. His intellectual mentor at that time was the abbot Louis Lesueur.  In 1820 he moved to his father’s house in Metz, where he completed his studies in philosophy and rhetoric at the Collège Royal in 1823. During this time he fathered an illegitimate child with a servant.

After Tocqueville had moved to Paris and completed his law studies there, he became an examining magistrate in Versailles in 1826. In the following years he became acquainted with Gustave de Beaumont, with whom he later travelled to America, and with the Englishwoman Mary Motleys (1826), with whom he entered into a marriage in 1835 that remained childless. He attended history lectures by François Guizot at the Sorbonne in Paris (1829/1830) and received his doctorate in Versailles in 1830.

By this time, Alexis de Tocqueville also started his political career. He defended the abolitionists in parliament, supporting free trade and the colonisation of Algeria. In the 1830’s, he was given the task to observe American prisons, which he traveled across the country for. Next to his examinations, the politician also created very detailed manuscripts on the life and political situation in America. After about two years, he returned with a report, representing the foundation of his most famous work, De la démocratie en Amerique published in 1835.

Next to America, Tocqueville also traveled through Europe, publishing several political works. When Tocqueville completed his journey to Algeria, he noticed problems in the French system of colonization, building on assimilation. Instead, he preferred the British methods of avoiding a mixture of populations. When traveling to Ireland, he provided the most detailed information about the country and it’s political as well as religious situation, which he published successfully after returning.

Tocqueville’s most famous work Democracy in America consists of two parts, published in 1835 and 1840. In it, the political thinker and philosopher examines the democratic revolution of which he believed to have happened over the past 700 years. During his travels through America, Tocqueville noticed that the aristocracy was about to disappear and that some kind of equality was established from which the modern world could generally benefit. In order to Tocqueville, important factors responsible for these effects were for instance the growing economic opportunities which led to the growth of commerce and trade. Also he saw the abolition of primogeniture and the fact that all men were able to enter the clergy as influential for the described developments.

A Demand for New Political Sciences

Seeing these changes, Tocqueville demanded new political sciences. At the beginning of his America studies, the thinker describes the contributions of the Puritans, who in his mind were mostly responsible for America’s state of democracy. They established equalities in education and a synthesis of religion and liberty. Another big topic of Tocqueville’s analysis depicted the situation of women. He was one of the first to examine ‘their’ situation, finding out that the patriarchal order in families decreased due to the collapse of the aristocracy. Tocqueville explains that women in the America he observed were more independent and remained unmarried much longer. Even though Tocqueville did not view women potentially able to act as equal to men, he welcomed their new role and growing independence in the American society.

The Failings of Democracy in France

In general, this work analyzes the differences between the American democracy and the failings of democracy in France. He also gives insights on the possible future of the Unites States’ democracy seeing dangers as well as many advances. The books turned out to be an immediate success and were popular in Europe and the United States. It became a classical work and is assigned in most American and European universities as a major work in political theory. The predictions he made in the book are still highly discussed at this time. To his major predictions belong the possible tyranny of the majority over thought, the preoccupation with material goods, and isolated individuals.

Political Activities and the 1848 Revolution

Between 1839 and 1848, Alexis de Tocqueville was a member of the moderate opposition. He opposed the Guizot government, which, in his opinion, had transformed French society into a gigantic apolitical joint-stock company. He declared that the pursuit of prosperity alone did not make good citizens. He played a special role before and during the February Revolution of 1848: In a speech to the Chamber of Deputies on January 29, 1848, he warned of the coming events: “Do you – how do I say? – not notice the revolutionary storm that is in the air?” This speech was henceforth regarded as prophetic, for barely a month later the monarchy under the “citizen king” Ludwig Philipp had perished in the revolution.

After the February Revolution of 1848, he fought socialism and voted with the conservatives; he was one of their leading representatives. As a member of the Legislative Assembly, he helped to shape the new Constitution. Tocqueville took over the Foreign Office in 1849, but resigned when Louis Napoléon, later Napoléon III, seized power in a coup d’état. Tocqueville was arrested during the coup d’état on 2 December 1851, but was released at Napoleon’s intervention. Embittered by the loss of liberal freedom, he withdrew into private life. Now he wrote the souvenirs, which – full of sarcastic remarks about his contemporary parliamentary colleagues – appeared at his request long after his death. His second major work L’Ancien Régime et la Révolution followed, the first volume of which appeared in 1856.