You are here: Home › geology › Alexander Ross Clarke and the true Shape of the Earth

On December 16, 1828, British geodesist Alexander Ross Clarke was born. He is best known for his calculation of the Principal Triangulation of Britain (1858), the calculation of the Figure of the Earth (1858, 1860, 1866, 1880) and one of the most important text books of Geodesy (1880). The figures from his second determination became a standard reference for U.S. geodesy for most of the twentieth century until satellites could improve accuracy. In 1880, Clarke also coined the term “Geodesy” when he published his famous book by that title.

Alexander Clarke was born in Berkshire, England and it is believed that he spent much time during his childhood in Jamaica. During his early school years, Clarke learned Latin and mathematics.In 1846, Clarke applied to the Royal Military Academy, Woolwich as a Gentleman Cadet. Clarke attended the Young Officers Course at the Royal School of Military Engineering at Chatham and there he would have studied surveying as well as military engineering. He was promoted to the rank of Lieutenant on 11 July 1849 at the end of that course.

The Principal Triangulation of Great Britain

Clarke was recruited for the final report on the Principal Triangulation of Great Britain. However, he was dispatched to military service in Canada before he could really make progress on the calculation of the triangulation. Superintendent Hall retired in 1854 and Yolland, the most competent member of the survey, was passed over in favour of Colonel Henry James. Yolland resigned immediately and Clarke was the only qualified candidate for the analysis of the triangulation. The report was accomplished by 1858, an exceedingly short period of time. His endeavour was rewarded by his military promotion to 2nd Captain in 1855 and by being appointed head of the Trigonometrical and Levelling Departments of the Ordnance Survey in 1856.

Clarke’s contribution to the Survey greatly enhanced its reputation. He himself was acknowledged as one of greatest geodesists in the world and he was honoured with fellowships at the Royal Society of London and the Philosophical Society of Cambridge. 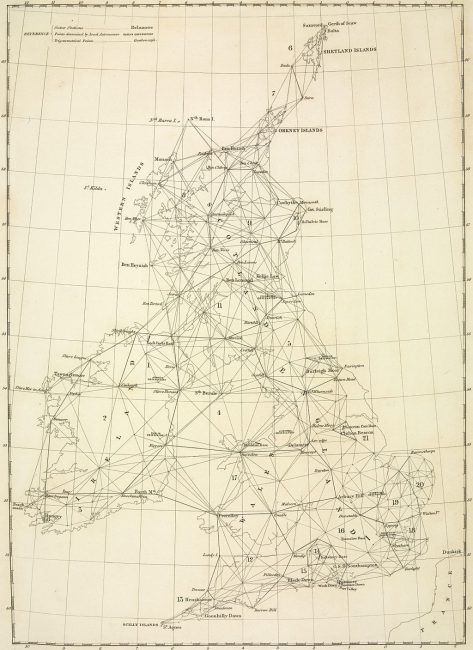 The principal triangulation mesh over Britain, 1860

The Principal Triangulation of Great Britain was started by General William Roy but it was only completed in 1853, just as Clarke was joining the Survey. The methods of analysis had been planned in outline by Yolland, his predecessor at the head of the Trigonometric Section, but it fell to Clarke to finalize the methods and carry them through to completion. The basic data was the collection of angle bearings taken from each of the 289 stations towards a number of other stations, typically from three to ten in number. The multiple observations were first subjected to a least squares error analysis to extract the most likely angles and then the triangles formed by the corrected bearings were adjusted simultaneously, again by least squares methods, to find the most likely geometry for the whole mesh. Once the triangles had been fixed it was then possible to calculate all the sides of the mesh in terms of the length of either of the bases, one by Lough Foyle in Ireland and the other on Salisbury plain. The final step was to use the distances and angles to work out the latitude and longitude of each triangulation point on the Airy ellipsoid. The result of the study was mostly of academic value only since Britain continued to define latitude and longitude on the Airy ellipsoid or, after 1936, a slightly modified version.

In one of his works, Clarke notes that General T. F. de Schubert had published a paper in which he claimed that the meridian arc data established that the equator of the Earth was elliptical in form. Clarke calculated that the inverse flattening varied between 309.4 and 286.8. (The difference in the equatorial semi-axes is approximately one mile.) However, Clarke estimated the errors of the results and found that the error in longitudes could be as much as 20°. Therefore, he maintained that the data were not accurate enough to justify a tri-axial model. 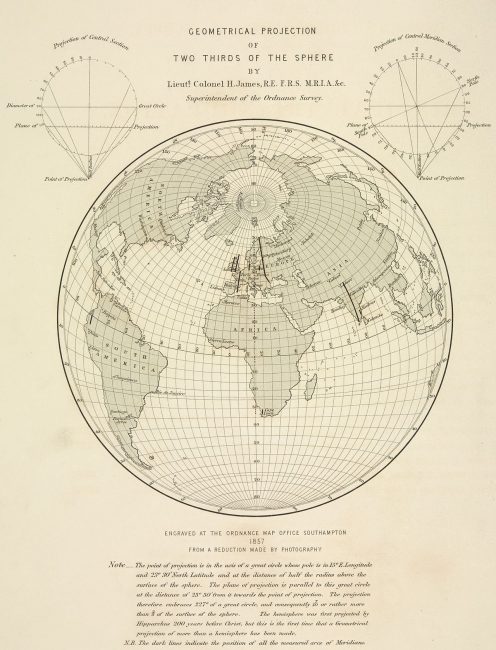 A perspective projection showing the meridian arcs used in computing the figure of the Earth, 1860.

Geodesy was published in 1880 and was the first major survey of the subject since the work of George Biddell Airy.[3] It was well received throughout Europe and it was translated into a number of languages. Clarke also contributed two important articles to the ninth edition of the Encyclopædia Britannica (1878), one on Geodesy and a second on the Figure of the Earth (with the title of the latter being Earth, Figure of the). These articles appear unchanged in the tenth edition (1903).

After serving in England for 27 years, he was to be transferred overseas again in 1881, after which Clarke submitted his resignation. Even under public pressure, the army did not want to allow Clarke to continue serving in England. Clarke left the army on 1 October 1881 in the rank of colonel and moved to Redhill, Surrey. He left the Royal Society for financial reasons. In October 1883 Clarke was the British delegate to the Geodetic Conference in Rome, and in 1884 he became a British member of the International Geodetic Association. He received the Royal Medal from the Royal Society in 1887 and was reinstated as a member without any obligation to contribute. Alexander Ross Clarke died on 11 February 1914 in Reigate.