You are here: Home › literature › Alain-René Lesage and The Devil upon Two Sticks

Lesage was born in Sarzeau, a commune in the Morbihan department of Brittany in north-western France, located on the Rhuys peninsula between the Gulf of Morbihan and the Atlantic Ocean. His father, Claude Lesage, held the united positions of advocate, notary and registrar of the royal court in Rhuys. His mother’s name was Jeanne Brenugat. Both Lesage’s father and mother died when Lesage was very young, and he was left in the care of his uncle who wasted his education and fortune. Père Bochard, of the Order of the Jesuits, Principal of the College in Vannes, became interested in the boy on account of his natural talents. Bochard cultivated Lesage’s taste for literature. At age 25, Lesage went to Paris in 1693 “to pursue his philosophical studies”.

In August 1694, he married the daughter of a joiner, Marie Elizabeth Huyard. She was beautiful but had no fortune, and Lesage had little practice. About this time he encountered an old schoolfellow, the dramatist Antoine Danchet, who is said to have advised him to take up literature. He began as a translator, and published in 1695 a French version of the Epistles of Aristaenetus, which was not successful. Shortly afterwards in his dark years, probably very fruitful in moral observations, Lesage met a protector and guide in the abbot of Lyonne, who not only provided him with a pension of 600 livres per year, but also introduced him to the works of Spanish literature, of which he was himself a student and collector. Spanish literature was once very popular in France when the queens of the house of Austria sat upon the throne, but had become neglected by Lesage’s time.

Lesage and the Comédie Française

Spain, until then, had not brought Lesage much luck: in the meantime, the translation of the New Adventures of the admirable Don Quixote, by Alonso Fernández de Avellaneda (1704) had not been noticed. It was by making an original work, with his small one-act and prose comedy of Crispin’s rival Crispin (1707), which was often reprinted and never left the repertoire, that Lesage broke his bad luck. The great success of this piece is due to the truth of observation, the liveliness and frankness of the mind, as well as its natural cheerfulness and good aloi. Notwithstanding the success of Crispin, the actors did not like Lesage, and refused a small piece of his called Les Étrennes (1707). He thereupon altered it into Turcaret (1709), which is considered his theatrical masterpiece, which unmasks the moral depravation of a former lackey risen to the equivocal heights of high finance. Clearly out of step with the revered conventions of the Comédie Française, Lesage began a long feud with “respectable” theatrical people of his time and henceforth dedicated his dramatic talents to the production, singly or in collaboration, of more than 100 farcical vaudevilles.[3] 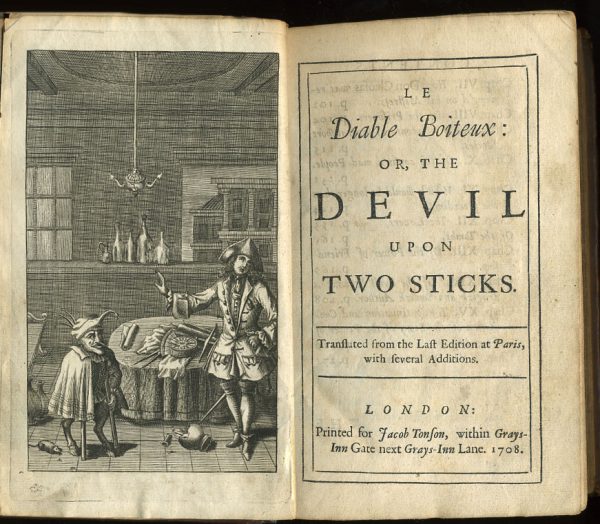 Frontispiece and titlepage of a 1708 English edition of The Devil upon Two Sticks, aka Le Diable boiteux.

The Devil on two Sticks

The same year, Lesage advertised himself as a novelist of first order with “Le Diable Boiteux” (The Devil upon Two Sticks, 1707), in which the hero was transported by the devil on the roof of each house, to see what happened there and to have the opportunity to tell an adventure without any connection with the above or with what follows. This work was also an imitation of Spanish, but a free imitation, appropriate to French customs and fertilized by the original and personal observation of the human spirit. In this work where the marvelous is there only for form, a whole variety of adventures and portraits quickly pass before the reader’s eyes, subjecting to a mocking and subtle critique a multitude of types, all striking in their naturalness and truth.

The Adventures of Gil Blas

Some years passed before he again attempted romance writing, and then the first two parts of his picaresque novel Gil Blas de Santillane (The Adventures of Gil Blas of Santillane) were published in 1715, without the popularity of Le Diable boiteux. It concerns the education and adventures of an adaptable young valet as he progresses from one master to the next. In the service of the quack Dr. Sangrado, Gil Blas practices on the poorer patients and soon achieves a record equal to his master’s, i.e., 100 percent fatalities. In service to Don Mathias, a notorious seducer, he also learns to equal and surpass his master. The sunnier spirit of Gil Blas had a civilizing effect on the picaresque tradition. Unlike most novels of the genre, it ends happily, as Gil Blas retires to marriage and a quiet country life.[1] Critics have found in Gil Blas a dual moral significance linked conceptually to the novel’s form: on the satirical side, life is seen to be a theater of illusion, pretension, weakness, and deceit, while on the constructive side, man comes into his own—literally becomes himself—only after a series of painful meanderings; yet this often pitiable life is of inestimable value, since its vagaries have as their end product man himself.[3] Lesage worked at it for a long time, and did not bring out the third part until 1724, nor the fourth until 1735. During these twenty years he was, however, continually busy.

Notwithstanding the great merit and success of Turcaret and Crispin, the Théâtre Français did not welcome him, and in 1715 he began to write for the Théâtre de la foire, the comic opera held in booths at festival time. According to one computation he produced, either alone or with others, about a hundred pieces, varying from strings of songs with no regular dialogues, to comediettas only distinguished from regular plays by the introduction of music. He was also industrious in prose fiction. Besides finishing Gil Blas he translated the Orlando innamorato (1721), rearranged Guzman d’Alfarache (1732), published two more or less original novels, Le Bachelier de Salamanque and Estevanille Gonzalez, and in 1733 produced the Vie et aventures de M. de Beauchesne, which resembles certain works of Daniel Defoe.[6] Besides all this, Lesage was also the author of La Valise trouvée, a collection of imaginary letters, and of some minor pieces including Une journée des Parques. He did not retire until 1740, when he was more than seventy years of age. Lesage’s last work, Mélange amusant de saillies d’esprit et de traits historiques les plus frappants, appeared in 1743.