You are here: Home › engineering › Adolphe Sax and the Invention of the Saxophone 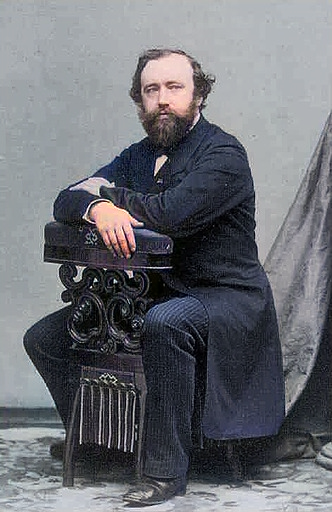 On November 6, 1814, Belgian musical instrument designer and musician Antoine-Joseph “Adolphe” Sax was born. Besides playing flute and clarinet, he is well known for having invented the saxophone.Sax became something of a footnote in history after his creation was almost forgotten after his death, until it was revived by jazz musicians who barely remembered his name.[2] Back in the time when I was a student, I remember one fellow student who ‘polluted’ the air of the student’s dorm for two long semesters with his (futile) practicing on that very instrument invented by Gustave Sax. I can tell you that it is really a pain to listen to a beginner’s trials on the Saxophone.

Antoine-Joseph Sax was born in Dinant, Belgium, as the oldest of 11 children to Charles-Joseph Sax, an instrument designer, who made several changes to the design of the horn. Sax became his father’s apprentice and began to make his own instruments at an early age, entering two of his flutes and a clarinet into a competition at the age of 15. He subsequently studied those two instruments at the Royal Conservatory of Brussels. Sax faced many near-death experiences. Over the course of his childhood, he fell from a height of three floors, hit his head on a stone and could barely stand afterwards. At the age of three, drank a bowl full of vitriolized water and later swallowed a pin. He burnt himself seriously in a gunpowder explosion, he fell onto a hot cast-iron frying pan, burning his side, he survived poisoning and suffocation in his own bedroom where varnished items were kept during the night. Furthermore, he was hit on the head by a cobblestone, and fell into a river and nearly died.

Too small for his Ambitions

In 1835 he perfected a bass clarinet superior to any that had preceded it. Before long, Sax concluded that Belgium was too small for his ambitions. At the Belgian Exhibition (an industrial fair) in 1840 he presented nine inventions, among them an organ, a piano tuning process and a sound-reflecting screen. The judges felt that Sax was too young to receive the gold medal, and instead awarded him the vermeil (gilded silver). Sax came to Paris in 1842 and succeeded in interesting many eminent men, including composer Hector Berlioz.[4] He set up a workshop in the Rue St Georges and studied acoustics, discovering a new principle in the manufacture of wind instruments, viz. That it is the proportions given to a column of air vibrating in a sonorous tube, and these alone, that determine the character of the timbre produced: the material of the walls of the tube is not of the slightest importance so long as it offers enough resistance.[1] 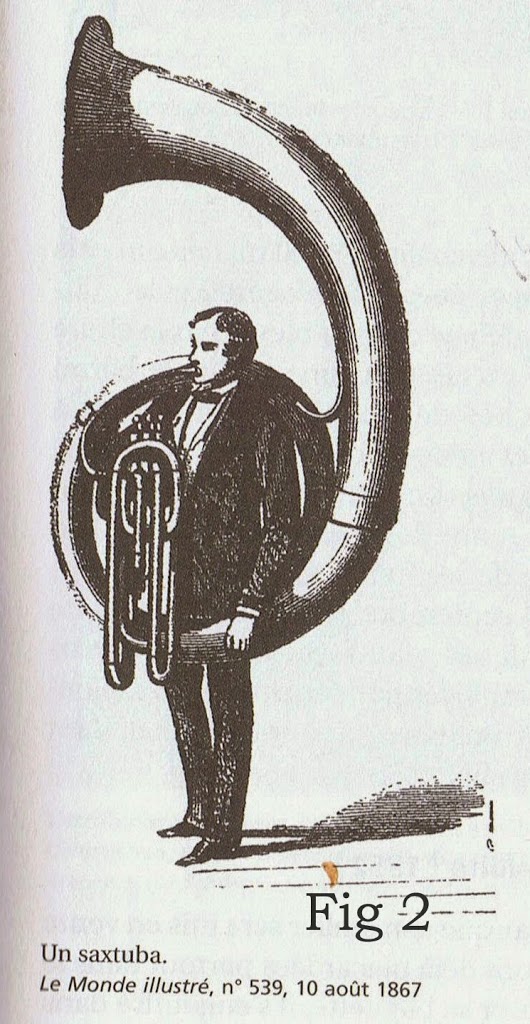 The Saxtuba, one of Adolphe Sax’s instruments (1867)

A Profound Knowledge of Self Advertisement

Together with his genius for mechanical invention Sax seems to have combined a knowledge of self-advertisement, and his name was often prefixed to successful types of instrument for the invention of which he was not primarily responsible. Sax also developed the saxotromba family, valved brass instruments with narrower bore than the saxhorns, in 1845, though they survived only briefly. Saxhorn instruments spread rapidly throughout the world. The saxhorn valves were accepted as state of the art and are largely unchanged today. On June 22, 1846 he registered the saxophone and won his gold medal at the Paris Industrial Exposition in 1849. By the ned of the year Sax had designed, on paper, a full range of saxophones (from sopranino to subcontrabass). Although they never became standard orchestral instruments, the saxophones made his reputation and secured him a job, teaching at the Paris Conservatoire in 1857.

“Its principal merit in my view is the varied beauty of its accent, sometimes serious, sometimes calm, sometimes impassioned, dreamy or melancholic, or vague, like the weakened echo of an echo, like the indistinct plaintiff moans of the breeze in the woods and, even better, like the mysterious vibrations of a bell, long after it has been struck” (Hector Berlioz about the Saxophone)

Sax’s workshop sold some 20,000 instruments between 1843 and 1860, but he was not a talented money manager, and sales were not enough to keep him solvent. He filed for bankruptcy three times, in 1852, 1873, and 1877, and he was saved from a fourth debacle only by the intervention of another of his admirers, Emperor Napoleon III. He also effected various improvements in piston instruments, of which the most important was the substitution of a single ascending piston for a number of descending ones. Sax suffered from lip cancer between 1853 and 1858 but made a full recovery. In 1870 Sax’s position at the Paris Conservatory was terminated in the aftermath of the Franco-Prussian War, and he lived his final years in straitened circumstances, kept out of poverty only by a small pension arranged for him by an admirer. He died in 1894 in Paris and was interred in the Cimetière de Montmartre.

History of the Saxophone. Part 1: Adolphe Sax and the Early Years, [6]